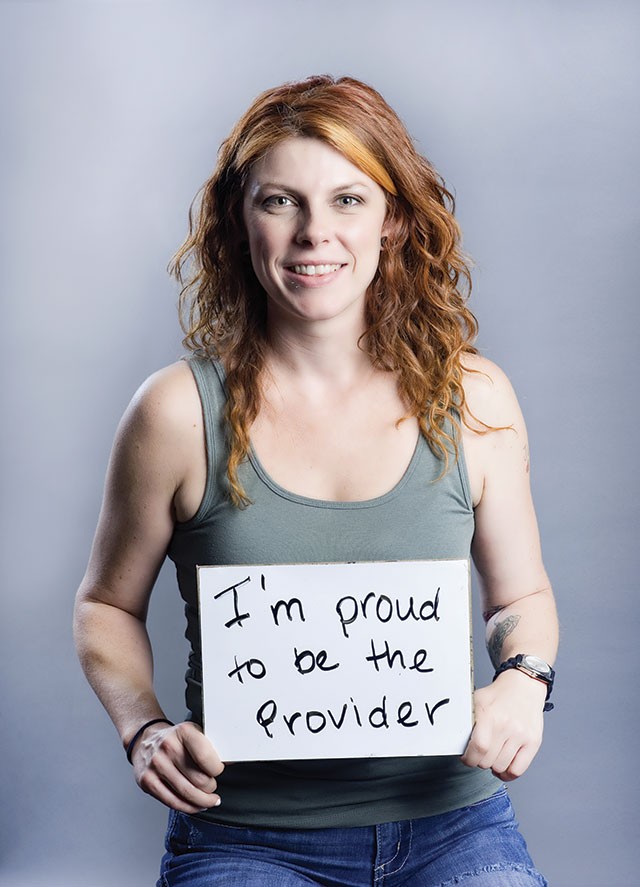 Are you a native San Antonian? If not, when did you move here?

I’m originally from Austin, lived a few years in Dallas, but I’ve been in San Antonio since ’91.

How did you become the primary breadwinner?

Somebody’s gotta do it [laughs]. I just happened to be the one.

I work three days a week as a stylist pretty much 9 to 5-ish, stand on my feet all day… Cut, color, customer service, just typical salon—busy.

Is your job now the career you’d always thought you’d have?

No, I never knew what I wanted to do. I still am not sure what I want to do. I just do what people tell me I’d be good at. Nursing’s the first thing that I ever thought I wanted to do. It was the only thing I’ve ever picked up my own initiative. And that’s because I feel like I can do so many different things with it and not necessarily just a career—just using that career to do things in life.

What is your dream job?

My fantasy with nursing is to do the rural preventative health care in developing countries. It’s kind of just my dream to be able to travel and absorb other cultures and I’ve always said just go sleep with my head in the mud somewhere else for a few years and see what their life is like.

What’s the most rewarding aspect of your job?

Where do you see yourself in five years?

Buying my second, larger home and I’m not sure yet. I’m really at a transitional point right now. I’ll be done with school in the next two and a half years and after that I was just going to apply anywhere in the country. So maybe out of Texas, I don’t know if I could really ever bring myself to leave my family behind, because all my family’s here in Texas. Making more money than I am now and feeling more rewarded and providing a more secure life for my family.

What age do you expect to retire?

Paying my bills. Just having enough to make my bills and everything from mortgage and car payments to having two kids in private school.

Are you able to save money on your current salary?

Not much, no, not really. I’m not working enough anymore to…I’m in such a transitional point with phasing out of what I’m doing, I’m making less and less and being more and more of a student and focusing on my future career. So no, I’m definitely not where I’m used to being or where I want to be. It’s a sacrifice.

Has your career altered your personal life?

Not really. I mean to a certain extent I guess hairdressers have a lot of fun, just because it’s not like I’m pushing paper or something. You know, I just get to go do something that is somewhat innate and in my skill…kind of be a robot sometimes. I probably have stayed out a little longer, said ‘yes’ to more than I would if I had to go be under my boss’s thumb all day or something.

Did your mother work when you were growing up?

Yes, my mother—single mom—was an LVN my whole life until I was about 10 and then she went back to school and got her associate’s degree and her RN.

So when you graduate?

When I graduate, I’ll have my bachelor’s RN, my BSN, so I’ll break my mom by the time I’m done, even though she’s been a nurse for over 30 years.

Are you planning to always be the primary breadwinner?

I always plan on being independent enough that I won’t need anybody to be the breadwinner. Partnering with somebody that potentially makes more than me is fine but I will never be dependent upon someone. I’ll always make sure that I don’t incur anything that I couldn’t handle on my own.

How has being the primary breadwinner affected your relationship(s)?

It has. I think it’s emasculating to some. It can be an issue. Especially because I am so independent, people perceive that as that I don’t need anybody. [In] my relationships, people get offended that I don’t need them. Being independent is an emotional thing for me, too.

So your independence is more than just financial.

Yeah, so I guess in my relationships, my financial and emotional independence is hard for some to swallow.

How do you think society views female breadwinners?

I guess that depends what section you’re looking at. I think as a whole, we’re progressive towards that but there’s definitely a lot of ‘old-school’ out there still that doesn’t believe in women’s advocacy or that women should be the ones taking care of the family. I would hope that for the most part they think it’s a good thing.

What does “having it all” mean to you? Do you think you have it all right now?

I don’t think it’s necessarily material things, but it’s definitely some financial security…I guess not living beyond your means is what that means. Whether you have lots of money stashed away and a big nest egg, I guess that’s important to some. Other people might not have a large nest egg but they have everything they need that is paid for—whether that’s a Mercedes or a moped, they’re financially stable. My family’s happy and healthy but I’d like to be able to provide a little bit more for them.

Do you have parenting and childcare support from your family and friends?

Yeah, I do. I have a lot of family and friends that help me.

Has having kid(s) altered your career path?

Having kids made me choose a career. I kind of wasn’t really thinking about doing much of anything until I had kids. I was just living day to day. And I still do to a certain extent. That was the first time I realized I needed to have a career, make more money because I had to provide for somebody else all of a sudden.

So you got your license after?

I got my cosmetology license, yes, after I had my first child.

How do you feel like our job market accommodates working mothers?

I guess I don’t know well enough. I haven’t been a professional long enough in San Antonio.

But there’s no daycare at the salon.

No, there’s no daycare at the salon but then again I work for a small salon and they’re understanding if I need to do something for my kids. I don’t think it’s ever been a serious issue. I’ve worked for one employer that had a really strict policy. For the most part my personal experience has been fine with it.

What’s the most challenging aspect of raising your kid(s)?

It’s just exhausting. Some days just take every last bit of energy to do what I need to do as far as being at work or doing school assignments and trying to keep patience with my children in their ins and outs of the day. I think it’s just having enough hours and enough energy for each day is probably the most challenging thing.

What’s the most rewarding aspect of raising your kid(s)?

The most rewarding thing is when someone compliments you on your children. Having them say ‘thank you’ to me for something that I’ve provided for them. Or when they see me doing my homework that they talk about being in college and doing their homework, that’s rewarding that I’m setting that kind of an example. But I think the biggest thing is when one of my sons holds the door open for somebody and they say, ‘That’s a nice young man.’ It’s like ‘yes.’ I just want them to be aware of their surroundings and other people and be respectful of them.