Rise Up! There's a New Mural Under Westfall Bridge 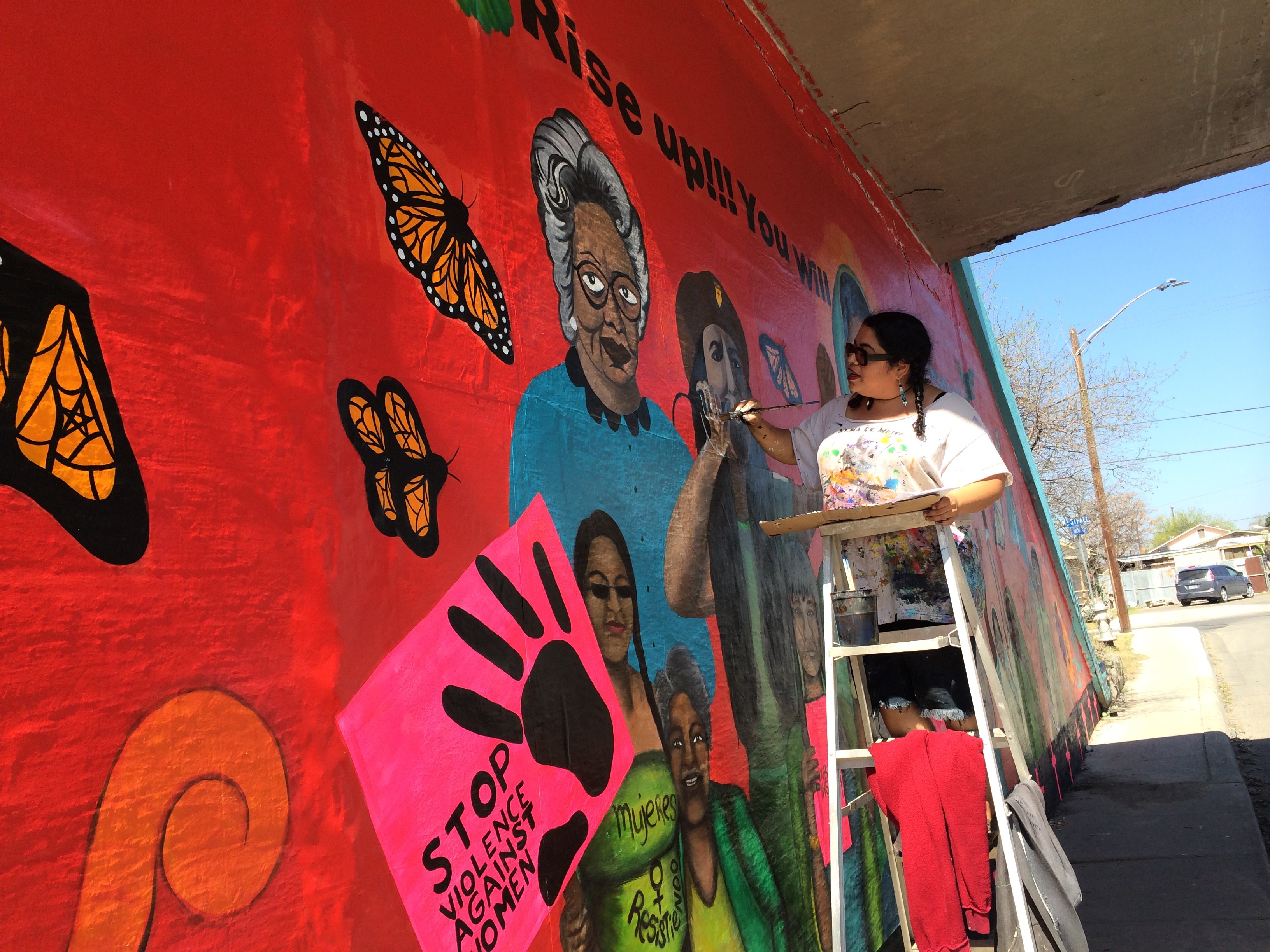 Jane Madrigal paints the final touches of "Dare to Be Powerful."

I was driving home for lunch when I passed artist Jane Madrigal painting the final touches of the mural under the Westfall Bridge on South Hackberry. It’s a bridge I drive under every day after work, and I’ve watched this mural evolve in the twilight. Today was the first time I saw it in the bright light of day with the artist in action atop a ladder. (Incidentally, this seems like a pretty dangerous place to work as cars zip through the narrow passage.)

“Dare to Be Powerful” is sponsored by the Martinez Street Women’s Center, and it commemorates the history of women and their struggle against violence and their march towards justice. Madrigal and other artists collaborated with middle school students in the neighborhood (Wheatley, Poe and Page). Some of the scenes reflect and connect the girls’ personal experiences. As Madrgial explained, they are young teens on the brink of dating, and the guys aren’t always nice. So they pass the mural on their way to and from school, and it’s meant to inspire them to make strong choices in their day-to-day.

This bright red and indigo mural with hot pink crosses, blazing monarch butterflies, and brave women heroes stands out and stakes its space. My commute from work is one of my favorite parts of my day as I roll from the north end of Hackberry to the south. At dusk, the streetlights and shop lights are flicking on. Guys are hanging out on the corner, sometimes loping across the street, telling me to turn on my headlights. But rarely do I see a woman, maybe one or two, on the sidewalk, until I reach this mural, a burst in the concrete. For years, I lived around the corner from the MaestraPeace Mural on the Women’s Building in San Francisco, and this one, over a year in the making, resonates.

The official unveiling is tomorrow, March 1. And no, it’s not coinciding with the launch of Contemporary Art Month. March is also National Women's History Month (International Women's Day is March 8), and Madrigal is not the only artist conflicted about the month. While it’s wonderful to have a whole 30 days blowing out art the way S.A. does, it surely sucks that it has to takeover a time reserved for commemorating the contributions of women.