SA Scorpions win 4-1 at Ft. Lauderdale, and could win it all 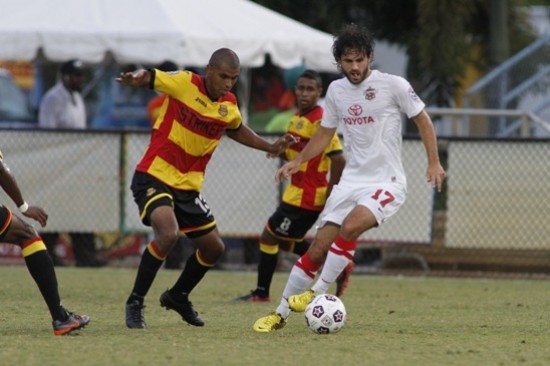 Just a few games ago, the SA Scorpions were near the bottom of the North American Soccer League standings. After soundly beating last-placed Ft. Lauderdale Strikers 4-1 at St. Petersburg, Fl. in their fourth straight victory, the Scorpions could now win the NASL Spring season.

It’s a long shot: to do so, they must beat leaders Carolina RailHawks Thursday at Toyota Field by a four-goal difference and hope that Atlanta Silverbacks doesn’t win at Minnesota.

The Florida game didn’t start well for Coach Tim Hankinson's boys. Showing a sluggish, disinterested form, they fell behind when Strikers defender Darnell King scored in the 11th minute after intercepting a poor pass from Scorpion defender Pat Phelan. From then on, the Scorpions played a slow, erratic game. But an isolated attack tied the game when Hans Denissen, in typical warrior fashion, stole a ball that was going out of bounds and assisted forward Eriq Zavaleta, who easily scored. After that, especially when Strikers defender Shavar Thomas earned a direct red card for a foul on Zavaleta just before half time, the Scorpions woke up and controlled the game until the end.

“We're not showing the energy we should,” Coach Hankinson said at half-time. “It's a vital game and we look sluggish at the moment, as if we were on a practice. We have to rip into our guys at halftime, so we come out with better energy and strength.”

That’s exactly what happened. The Scorpions took possession, moved the ball patiently, created spaces, took advantage of the extra man and executed with lethal precision: Denissen scored for the third time in as many games to put the Scorpions ahead in the 56th minute, captain Kevin Harmse scored from outside the penalty box (off an assist from Zavaleta) in the 67th minute and, in one of the best goals ever scored by the Scorpions, substitute Bryan Jordan netted the fourth after a wonderful combination with Fabrice Noel. In the last 20 minutes of the second half, the Scorpions showed great form and arguably the best soccer they played in the whole season.

Yes, it won’t be easy to beat Carolina by four goals on Thursday, but it’s also far from impossible. And the very fact that the Scorpions are in contention for the Spring season coming to the last game, is a testament to the team’s ability to recover from a bad start. For the second consecutive year, Coach Hankinson was able to put on the field a competitive team, and this year he did so after several of last season’s top players left for greener pastures. A true championship team is one that recovers from defeat, but also one that recovers before being defeated. That’s why Toyota Field should be packed on Thursday, at the very least to celebrate the guts of a bunch of guys who came back from near-hell to score the goals they needed to return home ready to make history.

The Scorpions (5-2-4) are now in third place with 17 points and a goal difference of +2 (the difference between goals scored and goals conceded; a victory earns the team three points, and one point for a draw). Atlanta (5-3-3) is in second place with 18 points and also a + 2 GD, and Carolina (5-5-1) is on top with 20 points and a +6 GD (if Carolina hadn’t tied its last game on the 89th minute, all the Scorpions needed to win the season on Thursday was a win against Carolina and a draw or defeat by Atlanta).

You can buy tickets for the Scorpions-Carolina game July 4 at Toyota Field here.