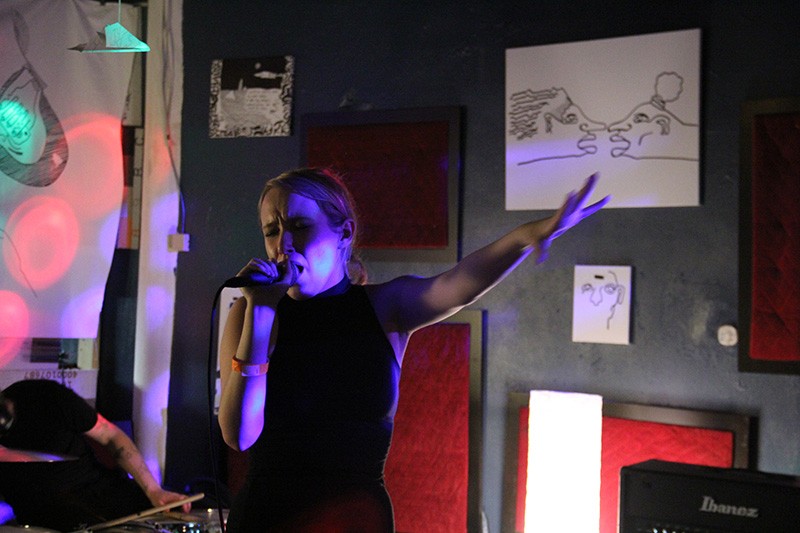 Delenda's most honest and memorable song clashes with dissonance against its foul-mouthed name. "Fuck," her most recent single, mines a very specific use of the word: a slumped-shoulders admission of defeat. "The song is about the feeling of 'goddammit, everything is going to shit right now,'" Haley Mills, the brain behind the Delenda persona, tells the Current. "It's an expressional form of the word 'fuck.'"

"I cry just a little bit inside when you hold her face," sings Mills, as an arpeggiated harp falls like gentle rain. It's a bitter thought developed into song, imagining a recent ex going home with someone in the rollercoaster days after a breakup. In a perfect pop switcheroo, Mills packs this tender experience into a lovely harmony, making an earworm hook out of five carefully weighted notes.

Diary-personal and thoughtfully arranged, Mills' recorded and free output (soundcloud.com/delendaa) makes for great headphone music. And in performance, she brings a new dimension to her work, bringing a flavorful answer to the sometimes-stale problem of live electronic music.

With a regular mic in one hand and a "big pipe-bomb-looking thing" called a copperphone in the other, Mills switches from full-bodied vocals to a thin AM radio tone. Adding to the dynamic, she recently added drummer Mike Barry to the live set.

"Having a drummer there gives a little bit of a feel that me just standing there doesn't allow," says Mills. "Having him add some live stuff to it gives me permission to move around and do what I want."

At a recent Nouveau Riche Records show at Nite Lite, Mills snaked through the crowd of the DIY space, drawing individuals out of the safe head nod and into bolder body language.

"I never know how people feel when they're sitting in the back, but I want to make them feel involved," says Mills. "If they're not going to come to me, usually I'll try to go to them. It makes people uncomfortable sometimes, but either way they walk away involved."

The whole project works around that idea of involvement, breaking through ritual and distraction to find raw and often scary emotion. The name, Delenda, comes from Latin, a plural noun meaning things to be deleted or removed.

Through her minimal computer pop, Mills asks us to shuck away the texting, social masks and pharmacological filters and participate in something real.