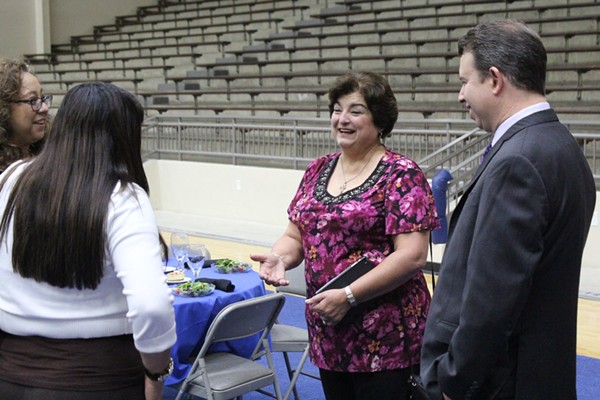 As first reported by the Express-News, Olga Hernandez, who's currently out of jail on bond, delivered a speech at the start of Tuesday's SAISD board meeting and announced that she'd step down to focus her full attention on fighting the criminal charges against her. “These past few days and weeks have been a very personal and challenging experience for me,” she told the board. “Quite frankly, it has been a nightmare that my family and I have had to go through together. … It is an allegation which is not true, and with time I will prove it to be false.”

Among other things, court documents filed last week accuse Hernandez, 65, of accepting bribes — like jewelry, cash and even casino vacations — from insurance brokers and consultants over a seven-year period in exchange for her help in steering SAISD contracts their way. She's been charged with conspiracy to commit fraud and if convicted could face up to 20 years in prison.

The allegations against Hernandez stem from Samuel Mullen, an insurance broker and alleged co-conspirator who last year pleaded guilty in federal court to bribing a consultant for inside information to help advance insurance contracts at the district. In denying the accusations against her, Hernandez's lawyer, Alan Brown, has called Mullen “an alcoholic and a liar.”

SAISD now begins the process of figuring out how to fill Henandez's seat. She was re-elected to represent District 6, which encompasses Edison High and an area north of downtown, in 2015, meaning her term doesn't expire until 2019. The SAISD board has called a special meeting for Friday night to determine whether they should appoint a replacement or call a special election to fill the remainder of Hernandez's term.