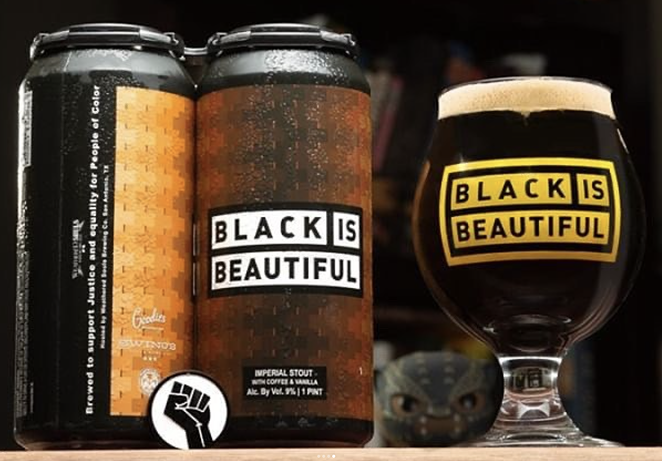 Instagram / mmmgoodies
Rocket Frog Brewing, Goodies Frozen Custard and Swings Coffee Roasters collaborated on a version of the Black is Beautiful stout.
Someone at the storied Martin Luther King Jr. Memorial Library in Washington, D.C. has some serious ‘splaining to do — at least to San Antonio craft-beer fans.

As part of a new exhibit, dubbed “Up From the People: Protest & Change in DC,” the library displays a version of the Black Is Beautiful Imperial stout produced by Virginia-based Rocket Frog Brewing, Goodies Frozen Custard and Swings Coffee Roasters.

However, the library neglected to mention the Black-owned San Antonio brewery where the Black Is Beautiful initiative was born, critics charge.

The Alamo City’s Weathered Souls Brewing last year made beer industry history by launching that groundbreaking program, which raised over $4 million to date for social justice groups in more than 30 countries by allowing other brewers to adapt its base imperial stout to create and sell fundraising versions of the beer.

While creating that brewing industry initiative would seem to rate a mention in the exhibit — especially since Black Is Beautiful brews are on display — apparently, that didn't happen. The Virginia-based collaborators shared photos of their stout placed prominently in the exhibit, accompanied by a quote from Goodies Frozen Custard owner Brandon Byrd. SA beer lovers took to social media to unload on the companies for not making sure Weathered Souls — or its head brewer and Black Is Beautiful creator Marcus Baskerville — were mentioned in the exhibit.

But the social media vitriol may have been misguided. Both Goodies and Rocket Frog Brewing say they were never approached about having their Black Is Beautiful beer added to the exhibit.

“I got pictures of the can in the exhibit about a week ago, and was absolutely excited to be included. I was just also surprised, because I had no idea it was happening,” Rocket Frog Brewing founder Richard Hartogs told the Current. “People are sending us [Instagram] messages, saying we should be ashamed for taking credit … but I literally had no idea this was happening until I got photos of the completed exhibit.”

“A friend of mine was at the library and happened to see the can on display and sent me a picture," Byrd said Friday by phone. "He asked me when I sent them a can, and I said, ‘I never sent them a can.’”

He added: “I’ll be real honest. I feel like for all the good that we did do, it’s all being overshadowed by this blowback. At this point, we’ve lost sight of what Black Is Beautiful was about. … An initiative that I was so excited about and was pumped to take part in, I have lost a lot of enthusiasm for based on this experience.”

Byrd added that he never provided the comment featured in the exhibit to the museum.

“That was something I said to a newspaper at the launch of our beer [in August of 2020]. It was taken completely out of context.”

On Friday, the Current also spoke to DC Public Library Communications Lead George Williams, who said he’d contact the internal group responsible for the oversight and provide an update once it becomes available.