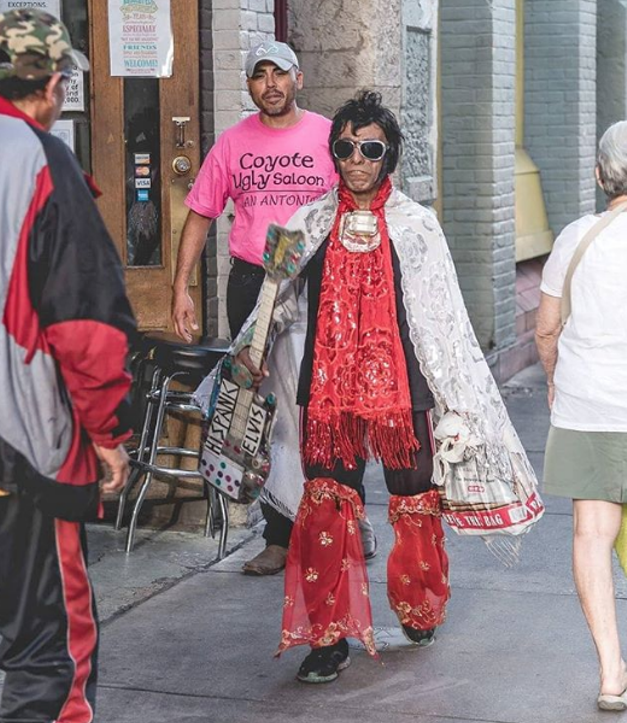 Instagram / taino_impressions
Hispanic Elvis struts his distinctive attire on the streets of San Antonio.
The flamboyant San Antonio celebrity known as Hispanic Elvis has been released from the hospital after a two-week stay to treat COVID-19 and an esophagus infection, a family member told KENS5.

George Cisneros, the street performer's brother, told the local TV station that hospital staff phoned over the weekend to let him know about the change in his status. Hispanic Elvis, 76, had been hospitalized since Jan. 10 and will move to a rehab facility.

Known for colorful garb that pays tribute to the King's Las Vegas years, Hispanic Elvis has been a Market Square fixture, posing for pics with locals and tourists alike. He's also known for riding his bike around the West Side, cape flapping behind him — an image depicted in a mural unveiled last fall by artist Colton Valentine.

“He loves to do what he does," Cisneros told KENS5. "He enjoys it and being with people."

Cisneros has set up a GoFundMe account to help cover his brother's medical expenses. As of press time Monday morning, it's raised $3,250 through 124 donations.

It's unclear whether Hispanic Elvis will return to giving Market Square performances. However, Cisneros told the TV station he'll support his sibling's decision.