Dancers at Columbus Park during the 2010 Indigenous Rights March. It's one thing that the U.S. (mostly) still celebrates Columbus Day, a federal holiday since 1937. But it's another thing to have a presidential proclamation ordering the flag to be flown at all public buildings in honor of “Columbus' bold expedition [and] pioneering achievements,” as President George W. Bush declared in 2002. Most of the Spanish-speaking world, recognizing that there are two starkly divergent views on Columbus — adventurer and explorer, mass murderer and slave trader — celebrate instead Dia de la Raza in an attempt to join diverse peoples bonded by a common language if not common views of Spanish conquest. Some are moving even away from that. Costa Rica, for instance, celebrates simply Dia de las Culturas (Day of the Cultures), while Argentina has gone a step further by celebrating Día del Respeto a la Diversidad Cultural (Day of Respect for Cultural Diversity).

It should tell us something that the Taíno people who first welcomed Columbus to the Caribbean are also an extinct people. Others, however, lived on. Those who swore allegiance to the Spanish King and Christian god (requirements for anyone who wished to avoid slavery and death, one frequently following the other), for instance, were allowed to live — assuming they were also able to resist European diseases such as smallpox that landed in the “New World” for the first time alongside the conquistadors.

Though San Antonio indigenous-rights marches date at least to the late 1990s with Antonio Diaz's Mestizos en Marcha, it was in the year of Bush's proclamation that Diaz founded the Texas Indigenous Council and held his first March for Indigenous Dignity. Key to his mission back then was reminding the Mexican-Americans of San Antonio that they were mestizos, people of mixed blood. More than that: They likely possessed more indigenous blood than Spanish. It's led to some interesting conversations through the years.

For the last several years, Diaz has also tried to get the City of San Antonio to declare an Indigenous Dignity Day. For the last several years, he has been rebuffed. This Saturday, crowds will rally once more at Columbus Park for a deeper level of understanding of our complex history and contemporary relations and urge once more city leaders to step up. — Greg Harman

Below are highlights from a longer Current interview with Antonio Diaz. 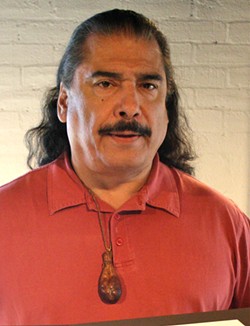 What led you to create the Texas Indigenous Council?

It first was to try to get Hispanics or Latinos who have indigenous ancenstry to discover those roots. ... A lot of Chicanos, people from Central and South America, are pure native, they don't have any European bloodline, but they still consider themselves Latinos or Hispanics. ... We've also sought to protect indigenous people, fight private prisons, T. Don Hutto, Raymondville (two prominent immigrant detention facilities). Not that we don't support human rights for people of all ethnicities, but we focused on an injustice toward indigenous people, [those] being criminalized for crossing ancestral migrant paths into North America.

That's a hot-button issue right now. What kind of responses do you get from people when you talk about the right to migrate?

Once I explain that we're the original people who were here before any of these nation-states they're very understanding and they say, “You're right.” There's no argument. But, they say, “How can we work on it?” And the answer is legislation, to educate our legislators.

What does it mean to people to rediscover or embrace a side of themselves that has been lost?

To some it's very powerful; it hits them like a thunderbolt. Others, they still reject it, because of colonialism. The lighter that we came out was called an improvement to our race, it's mejorando la raza. If you looked Indian and your child came out a little bit lighter, then you would say that your race was being improved. That is colonial mentality. And hopefully through our efforts dark-skinned children with dark hair and brown eyes will be proud of their indigenous heritages and won't try to cling to a Hispanic identity just to have some pride in themselves.

We're not attacking anybody. We do attack Columbus, but we do that on his own record, on this own words, the atrocities he committed. We don't want it to fester in hatred against any other race, but we don't want the government to shove down our throats a demon to us, a monster.

I've read during the scalp wars of entire communities adopting Mexican ways, cutting their hair, changing their identity — not that it always worked with the scalp hunters — of entire [indigenous] communities becoming Mexican in the quest for survival.

Yeah, but you have to run through the different citizenships. Even Columbus said it, and it was used against the Moors who had conquered Spain. It's called The Requirement of 1513 (El Requerimiento) that the Spaniards would read out loud that said, “You're now going to follow the Christian faith of the Catholic Church and you're now going to be vassels of the King of Spain, and if you don't agree with that then we will make war on you and enslave you and your children and take your property and sell it to whom we wish and make all sorts of mischeif upon you.”

Native people have had to assume a few different identities. [One-time President of the Republic of Texas] Mirabeau Lamar [who advocated for extermination of the Indians] declared, “There are no Indians of Texas left in Texas.” So, they didn't become Mexican, they became Spanish citizens. When Spain was finally kicked out in 1821, I believe, or 1824, then we became citizens of the Republic of Mexico. In the 1830s this area that was Coahuila y Tejas became the Texas Republic. Then when the U.S. Government stepped in, we became U.S. citizens. So we've undergone those different identities of nationalism, but we're still the same people. This land has been governed by different nations declaring us their citizens, but we're still the same people. We had to adopt different ways to survive.

Do you want the city to cease to celebrate Columbus Day?

Yes. And to accept October 12 as Indigenous People's Day. ... Since 2008 there are many cities that have Indigenous People's Day or Native American Day. Even states. In California, there are several cities. The Dakotas and Oklahoma are more in the lead on this this. Texas has been the most oppressive area against native people. Mexican people are indigenous people. Mexican as an ethnicity existed prior to the arrival of the Spaniards. It's Mexica, or Azteca. The Mexica were supposed to be over 400 tribes that were under the governance of the Aztecas.

How has Texas been the most oppressive?

If you look into the lynchings — there were more native people, I'd say indigenous people, you call them Mexican, lynched in Texas then there were blacks on the Mississippi Delta. But thousands were lynched just to take their land away, basically because they looked Indian. Which is why Mirabeau Lamar said there no more Indians left in Texas.

They even killed a federal Indian Agent who came to Texas to complain to the Texas government that they were violating federal law by attacking Indians in reservations and he was killed. That's how bad things were in Texas. The reservations that exist here are not of Texas Indians.

It's kind of amazing that the Supreme Court is talking about abolishing affirmative action as if we have arrived at an equal society, but in some ways we're still in the 1800s in terms of recognitions. What do you think is important for the dominant culture — we can't necessarily even say the “white” culture — to understand what Indigenous Rights Day would mean? What kind of understanding needs to come about in your mind?

Equality. The dominant culture, which includes Hispanics at this point, they need to learn a lesson about equality. Equality doesn't mean that you give someone a right. That person has those rights, but they're being denied. There's an effort to have our five missions included with UNESCO [United Nations Educational, Scientific and Cultural Organization] as a World Heritage Site. I've been to all those meetings to insist that the word “indigenous” be included in the title that UNESCO is going to use, because at this point they are only referring it to as the Franciscan Missions of San Antonio. They're saying they'll include it in the individual dossiers of each mission, but the title that will be seen by tourists worldwide will not be included in the title...

Even though indigenous people built the missions.

And maintained them for over 100 years before Anglo settlers and U.S. migration moved southward. That's the depth of racial discrimination, and it's invisible because to them we longer exist or that problem of racial discrimination doesn't exist. ... We went through all these different national identities in order to survive, but we're still here. You might as well kick me in the stomach over and over again because what they're doing is still colonialism. It's so insidious that you have to accept it in order to survive ... to fit within a society. We've never sold any of our rights to our natural resources that we had in common use, such as ancient migratory trails, or our rights to our water, or our rights to our trees, our land rights...

The march itself: Who is encouraged to attend and what is the message?

All people who believe in human rights for all people, those are the people we would like to participate. Even those that don't, if they want to learn, I would say come and listen to us. I'm pretty sure they may not like all the anti-Columbus statements that are made, but our children need to learn the truth: that what's said in schools is not the truth.

And the primary demand is for an Indigenous Rights Day?

That's our primary demand. That our city government at least recognize we exist and we can instill pride in indigenous communities.