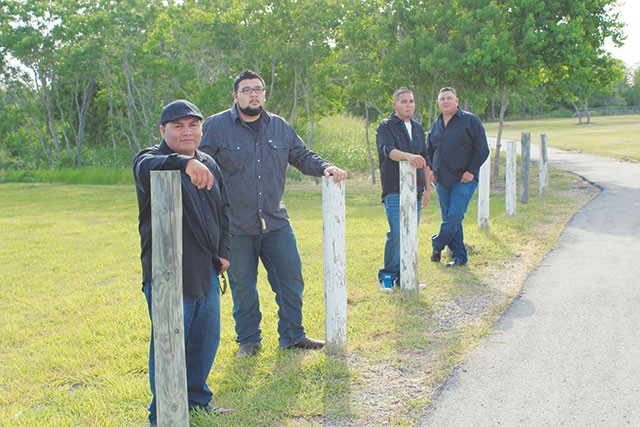 Well, if Grupo Texas Heat was underrated, those days are in the rearview. After winning the Best Tejano/Conjunto referendum in 2013, the SA quartet cleaned up this year, courtesy of a tradition-preserving, yet forward-thinking tejano flair.

Though he’s well versed in tejano heritage at this point, singer and guitarist Ryan Ortiz grew up playing a very different kind of music. “I can’t lie, all the way through high school I played in a heavy metal band,” Ortiz confesses. “Growing up in San Antonio, my grandfather and my uncles all played conjunto and tejano music. As I got older and spent all different kinds of holidays with the family, I didn’t want to be the black sheep left out of it. So I picked up a couple instruments and sat in and I began to like the music.”

In 2009, Ortiz started playing bajo sexto in his uncle Henry Dillard’s band, the South Texas Express. In time, Ortiz migrated over to guitar and vocal duties and the Express became Grupo Texas Heat.

“For the past few years, it’s been a totally different sound,” says Ortiz. “Coming from there to now, it’s a big difference.” With Bobby Garcia on accordion, the tectonic foundation of Andrew Rodriguez on drums and Richard Salazar on keys, Grupo Texas Heat is tearing up SA and South Texas stages with their crossover attitudes.

“We still play tejano and conjunto, but we have a little fun, keep it funky,” says Ortiz.

“We’ll get through playing a fast ranchera, puro accordion, and people are dancing. It gives us a little twang when we can say, ‘our accordion player just wasted the accordion, so he’s gonna take a little break now.’ I’ll let Richard hit it and he starts on ‘Easy like Sunday Morning.’”

As a guitarist, Ortiz balances a similar style between tradition and innovation. “In most American music, the guitar is the lead. In tejano and conjunto, the lead is the accordion. The guitar serves as the rhythm, and it’s pretty much upbeats. But we try to incorporate and experiment as much as we can.”

In addition to their rotating schedule of gigs in South Texas, the upcoming months will find Grupo Texas Heat hitting the studio for their first full album. Featuring a song from country pioneer Johnny Rodriguez, several originals and “one or two renditions of ’80s stuff nobody’s ever heard,” Grupo Texas Heat hopes to knock out the record late this year. And with such a thorough routing of this year’s awards, look out for the tremendous wake of that LP in next year’s voting.