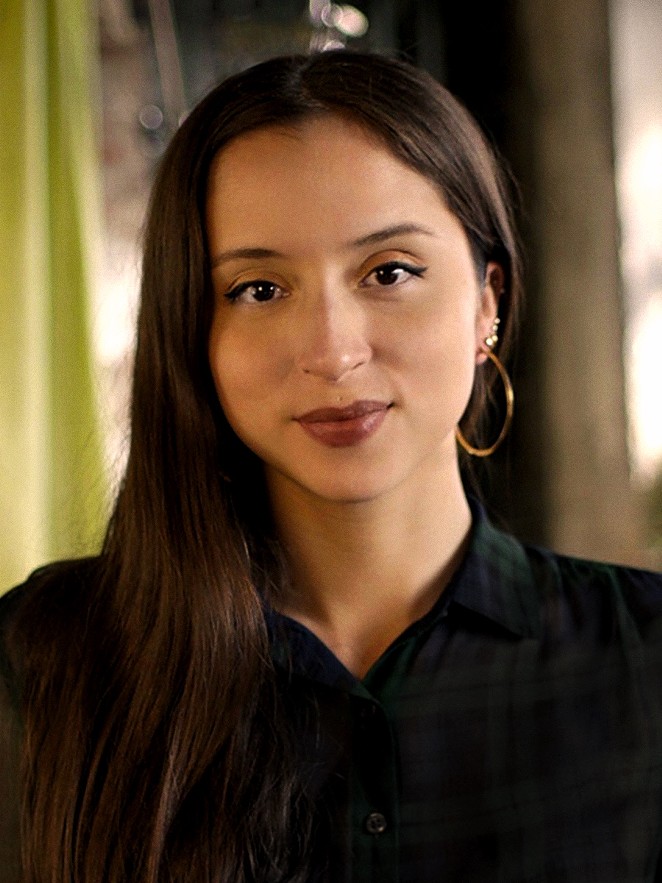 Writer, director and San Antonio native April Maxey has always wanted to tell stories from her point of view.

As a queer Chicana filmmaker, she said it’s a perspective the industry is less likely to ignore these days, but it’s still one that was viewed as niche cinema when she first started making movies in college 13 years ago.

“When I was realizing my own sexuality in high school, I didn’t find a whole lot of queer films to watch,” Maxey, 31, told the Current during a recent interview. “I didn’t see a lot of them, so that’s why I decided to start making them.”

A 2008 graduate of John Marshall High School, Maxey moved to New York City to attend Pratt Institute in Brooklyn, where she initially majored in graphic design. At the time, she wasn’t sure how making movies could become a career, but during her junior year, she decided to make a leap of faith into film and video.

“I was taking film electives on the side because I really liked it,” Maxey said. “So, I decided to change my major and go for it. It turned out to be a thrilling experience. There is this energy that I feel from the people who are affected by the stories I put on screen.”

Since then, Maxey has written and directed short queer narratives that have screened at more than 60 festivals around the world. Those include the Frameline Film Festival in San Francisco, the longest-running LGBTQ+ film festival in the United States.

Her latest short, Work, is available to view online through January 31 as part of the 2022 Sundance Film Festival. The 13-minute film tells the story of a young queer woman who returns to her old job as a stripper after a messy breakup with a girlfriend.

“At first, [Work] was going to be a love story, but then I went through a breakup during the pandemic and realized I couldn’t make a love story,” Maxey said. “I was in this transitional place in my life. I think it’s very relatable.”

Maxey shot Work in Los Angeles after being one of eight filmmakers selected for the American Film Institute’s Directing Workshop for Women – Class of 2021.

“As part of the workshop, they would bring in these script experts who would do these long sessions and would dig into the story and ask us why we were telling it,” Maxey said. “It felt like a therapy session. I really loved it.”

Along with the breakup storyline, Maxey, who’s since relocated to LA, could also relate to the main character’s decision to return to dancing at a strip club. It’s something she also did to make money when she was between freelance gigs during college.

“That experience never left my head,” she said. “I don’t think people really understand what it’s like to work a job like that. In Hollywood, it’s either highly glamorized or demonized. I wanted to show my personal experience with it.”

She hopes that when viewers watch Work, they feel a sense of confidence in the characters. It’s something she said she felt herself when she was dancing.

“There’s something about it that makes you tap into this fearlessness,” she said. “You develop this very thick skin. You’re like this salesperson, and you get rejected left and right. All the women there have these different lives. It was very interesting.”

What’s also interesting to Maxey is that her shorts have started screening at non-queer film festivals over the past few years. When she first started, the only ones accepting her work were those showing films centered on LGBTQ+ issues. Now, more mainstream fests are programming queer content.

“I think having one of my films play for a mainstream audience is powerful,” Maxey said. “I do love queer festivals and being with a queer audience though.”

As she continues to explore filmmaking opportunities, Maxey wants to tell more queer stories. Currently, she’s working on a feature script version of Work and has taken on freelance commercial jobs for companies including Jack Daniel’s.

As long as she can continue to make intimate films and not allow Hollywood to dictate what she does, she’ll be happy behind the camera.

“I’m always trying to write from the emotional space of my characters and focus on that,” she said. “I still think there is so much room for different voices in queer storytelling.”