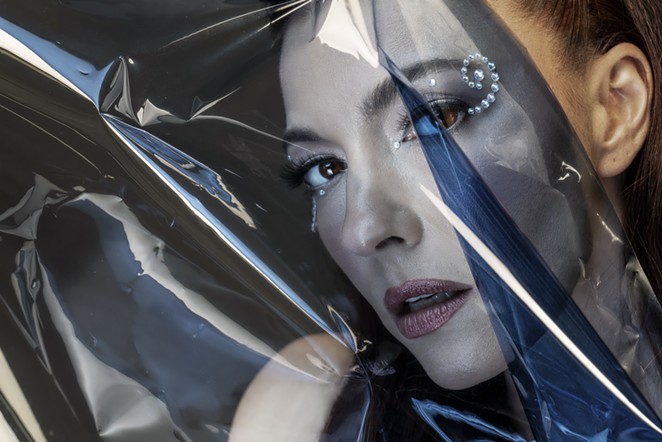 Mathieu Bitton
Chrystabell's album Midnight Star debuted Friday on Love Conquered Records.
Futuristic avatar and current humanoid Chrystabell excels at bringing new sounds to this dimension, whether looking backward or forward for inspiration. It’s no surprise that she rolls a visual flair for weirdness into her music, given her past collaborations with oddball filmmaker David Lynch.

Back in the days when she was known as Chrysta Bell, the singer led 8½ Souvenirs through a retro, swing-based sound that featured her vocalizing in multiple languages, a postmodern chanteuse for the 20th century. Indeed, by the ’90s, the world had gotten smaller. But the internet was poised to shrink it more.

While the music on Midnight Star couldn’t sound more different to 8½ Souvenirs on the surface, a surprising number of common threads show that Chrystabell’s (quite possibly) robot heart still reverberates to that same beat. Sure, tech bros aspire to lead humanity to the stars in this new century, but we still need divas.

The track “Love Confit” is a perfect example of her future lounge stylings, as is “Clouds For Breakfast.”
click to enlarge Or consider the title cut. A swirl of synths and a countdown welcomes listeners with a vibe that conjures up Fhloston Paradise from the end of Luc Besson’s sci-fi cult classic The Fifth Element. Need more evidence? The first lyrics are “Spaceman / soaring to heaven.”

Any music going for a future vibe these days is likely to include EDM elements such as beeps, boops and drum machines, and Midnight Star is no exception. However, these songs aren’t dance floor bangers. For one thing, they’re rooted in chord changes. Unlike much EDM, which relies on loops, some of which approach drones in their aspirational adherence, creating a stark post-apocalyptic groove.

Still, fitting the aesthetic, it’s not hard to imagine a talented producer tweaking these tracks and reinventing them as dance floor invitations. Perhaps that’s a tribute to the strength of the songwriting — or to the production. The poppy “Suicide Moonbeams” could easily be an 8½ Souvenirs song if it featured different instrumentation.

Or perhaps, just perhaps, seeing Chrystabell as a badass cyborg on the freaky-deaky cover art plays a role. After all, you don’t appear in David Lynch productions without a certain peculiar flair. And Chrystabell brings that in spades to Midnight Star.