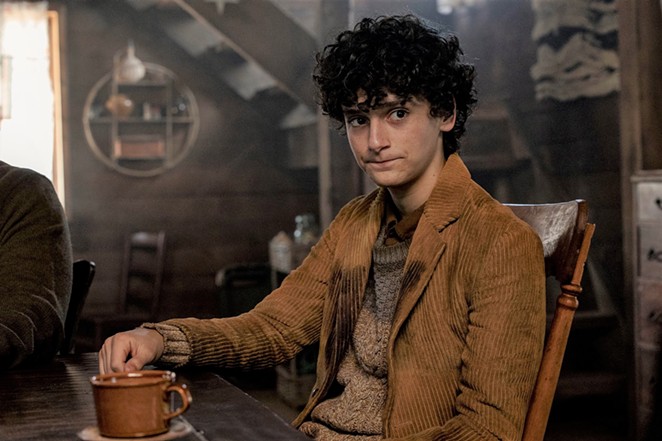 He may have only spent the first 10 years of his life in San Antonio before moving to Los Angeles to pursue an acting career, but Nicolas Cantu has fond memories of the Alamo City.

“I was very young when I lived there, so I remember I liked going to Six Flags and a lot of the parks,” Cantu told the Current during a recent interview. “There’s also this restaurant called Big’z [Burger Joint]. They have this huge yard, so you could go outside and play around. There are so many nice things you remember when you’re 6 years old. Shout out to Stone Oak Elementary!”

Now 18, Cantu stars in AMC+ series The Walking Dead: World Beyond, the second spinoff of the original Walking Dead TV series. On the show, currently at the midway point of its second and final season, Cantu plays Elton Ortiz, an orphaned kid who’s a survivor of the zombie apocalypse.

Besides his role on World Beyond, Cantu has given voice to several characters on animated shows including Sofia the First, The Powerpuff Girls and The Amazing World of Gumball, where he plays the title character. Next year, he’ll star in The Fabelmans, a semi-autobiographical film directed by Oscar-winner Steven Spielberg (Saving Private Ryan) about the screen legend’s childhood growing up in Arizona.

Recently, Cantu caught up with the Current to talk about zombies and the one word in Spanish he says best describes the director of Jaws, E.T. and Jurassic Park.

New episodes of The Walking Dead: World Beyond air Sundays at 9 p.m. CT on AMC+.

What are you looking forward to the most now that The Walking Dead: World Beyond is in its second and final season?

[Audiences] will get to see how it all ends. We had our first season, and people liked it. Now, we get to see where these characters go. I think it’s a great conclusion. People are going to be able to see the arcs of these characters come to a close. [Viewers] are itching for more information.

How would you describe your character as he goes into a new season?

Elton started in this community and has gone out into the apocalypse, and he’s lost a lot. But he’s also gained a lot of information and knowledge. So, he’s going into the second season with the realization that he’ll have to grow up a lot more. There’s going to be a lot more hardship coming his way, so he has to get ready for that. In this new season, he’s open to new ideas. You see Elton as this pragmatic, nihilistic guy, and then in Season 2, we explore what happens when he finds somebody who clashes with him. We get to explore that part of his psyche.

Remind us how many zombies you kill in the first season.

In Season 1, I think I actually kill one. I dispatched multiple zombies, which is like kicking them away, so they don’t bother you anymore. So, we have to get those [kill] numbers up this season.

What was that day on the set like when you finally got to kill a zombie?

It was great. I always love doing stunts on the show. I’m a part of a zombie apocalypse, but up to that point, I was mostly running. I finally got to kill something, so I had some action. I enjoyed it.

What do you think keeps people tuning into zombie TV series and movies?

It’s just a fun hypothetical. Ever since I was little, I grew up playing zombie video games and watching the movies. So, we always just entertained that idea. What would I do in a zombie apocalypse? What would be the route I’d take? I think people like asking that question. Dystopia in general is just a great genre. People like diving into that no matter what form it takes. (Laughs.) People just like watching horrible things.

What about The Walking Dead franchise itself? Not many franchises get three separate TV shows like this.

Well, it’s based off those awesome comic books by Robert Kirkman. The show’s been going strong for over 10 years now. When I was watching the first two shows, what drew me into them were the characters. You were seeing them push the envelope in what TV characters could go through. There were a lot of cool, human dynamics to it. We also get to kill a lot of zombies, and there’s a lot of explosions, so it’s fun.

What’s one word you would use to describe Steven Spielberg?

Un tipazo. He is just the greatest guy. He is awesome. He is so, so sick.