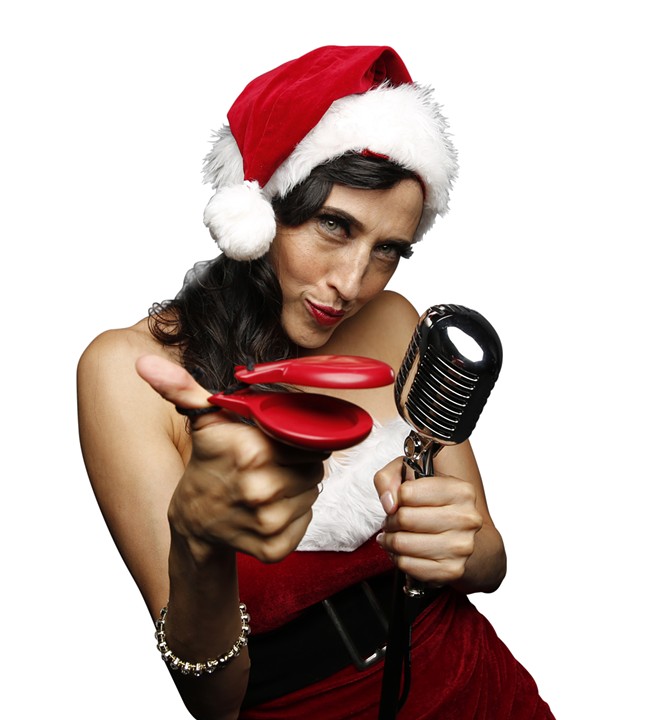 Mark Del Castillo
Vonne will celebrate her new Christmas album My Favorite Holiday with a performance at Sam's Burger Joint on Nov. 28.
For some, singer-songwriter Patricia Vonne is best known as the sister of film director Robert Rodriguez. And, yes, she’s been in some of his movies, including Desperado, Spy Kids and Sin City.

But — to state the obvious — the famous San Antonio natives share more than an enthusiasm for film, they share a mother. And it was her who inspired Vonne to record her new Christmas album My Favorite Holiday.

Vonne and her band will celebrate the LP, which drops this week, with a Sunday, Nov. 28 release show at Sam’s Burger Joint.

The genesis of My Favorite Holiday came when Vonne started a San Antonio Food Bank drive to celebrate her mother’s 85th birthday. As part of the effort, the singer wrote a tune called “Santa’s on His Way” and sung it a capella on Facebook Live as she worked to drive donations.

“The basic needs for humans are food and shelter. No child should go hungry,” Vonne said. “I wanted to write a song for them in December.” Courtesy Image / Patricia Vonne
Vonne's new album My Favorite Holiday drops on Nov. 19.
to perform on her float in San Antonio’s annual holiday river parade. But, since the record industry has shifted from albums to singles, Vonne assumed her Christmas-inspired work would end with “Santa’s on His Way.”

That’s not what happened. Her holiday spirit ended up spreading to collaborators.

“I sent [the single] to my friend Scott Plunkett of Chris Isaak’s band and asked him to put piano on it,” Vonne said. “It came back sounding like a full orchestra. Then he said, ‘I want to write a song with you.’ That was the miracle that started it. I tell him that he changed the whole trajectory.”

The goal of an EP sprung from the collaboration. Then a full album.

“I reached out to my go-to people,” Vonne said. “Rosie Flores, Johnny Reno. We got working on ‘Santa’s on a Rampage.’”

The singer continued looping in other peers, eventually including salsa heavy hitter Ruben Blades. As a result of her broad range of collaborators, the final product cuts across a wide range of styles from rock to Latin to traditional to choral.

All of My Favorite Holiday’s tracks are original Vonne compositions, save one: “Carol of The Bells.” She completed that song a capella with her sisters, who have a long history of singing together.

“My mom would take us to the movies every weekend. We would never leave the theater without watching it twice, including the four-hour Gone with The Wind or Sound of Music,” Vonne said, explaining her love for the Von Trapp family’s musical vibe.

“My mom would teach us the chords, and we would perform at school recitals and things. We would get together and sing songs, and ‘Carol of The Bells’ was one of our favorites.”

The release party will include some of Vonne’s new holiday-themed material, but don’t expect to her to focus on those exclusively. Her previous recorded work has spanned country, Latin styles and Tex-Mex-infused rock — and there’s good reason to expect a similar blend live.

“I’m going to mix it up. Some of the [Christmas] songs won’t translate well on stage,” she said. “And it’s a lot for my musicians to learn really fast. [Because of COVID-19] we haven’t even rehearsed in two years.”

While it hasn’t hurt Vonne’s career to have a famous sibling in the movie business, she’s put in decades of work in the music industry, having gotten her start at New York City’s ultra-hip China Club as a coat-check girl in the late ’80s. Her sister, who worked at the venue, helped her relocate to the Big Apple.

“It’s this celebrity club, and she let me cover her shifts,” Vonne said. “I wasn’t even 21. We’re meeting Julian Lennon, David Lee Roth, David Bowie. Then my first gig was at the China Club. Because I worked there!”

Vonne’s career is filled with a notable mix of styles. Her most recent project prior to My Favorite Holiday was the Texicana Mamas, a folk-flavored collaboration with Tish Hinojosa and Stephanie Urbina Jones. Vonne said she lets her muse guide her through genre jumps.

“I always start with the title, and then it kind of writes itself,” she explained. “It’s really varied if you co-write with people.”

Vonne considers the essence of her music to be roots rock: “It’s acoustic-driven with an emphasis on melodies. I say it’s flamenco rock.” Her status as an independent artist without a major label “breathing down my neck” has enabled her to forge her own stylistic path, whether that leads to rock, country, folk — or a Christmas album.

“Success is not looking at the competition,” Vonne said. “Success is the journey, the adventure. The opportunity you make.”