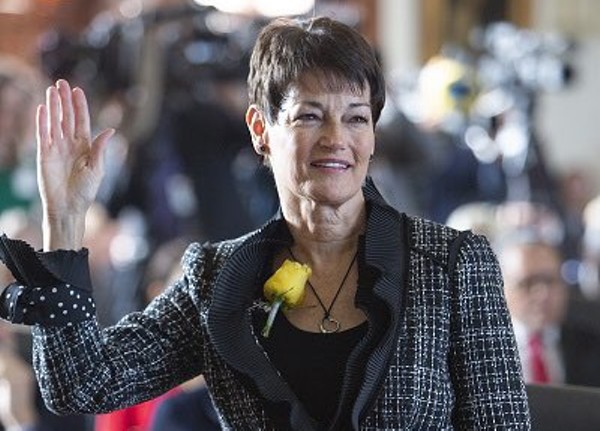 Twitter / @DonnaCampbellTX
State Sen. Donna Campbell is sworn in at the start of the current legislative session.
Praise the Lord and pass the ammunition.

Texas Sen. Donna Campbell, whose district includes New Braunfels and North Bexar County, has filed a bill that would let Texans carry firearms in houses of worship. However, her bill doesn't disallow churches from posting signs that prohibit weapons on their premises.

"We have learned many times over that there is no such thing as a gun free zone," the Tea Party Republican said in a news release. "Those with evil intentions will violate the law and carry out their heinous acts no matter what."

In addition to letting folks pack in the pews, Campbell's SB535 would reduce penalties for licensed citizens who unknowingly carry guns into prohibited areas. What's more, it would increases penalties for armed people who fail to comply with an order to leave areas where guns are prohibited.

Campbell, who's given firearms a starring role in campaign ads, enjoyed a 100 percent rating from the NRA last year.

She also has a history of clinging to some way-way-way-right-of-center notions. Among other things, she once championed a failed bill that would ban foreign ownership of the Alamo and displayed shock during an education hearing that Texas doesn't teach creationism in public schools.