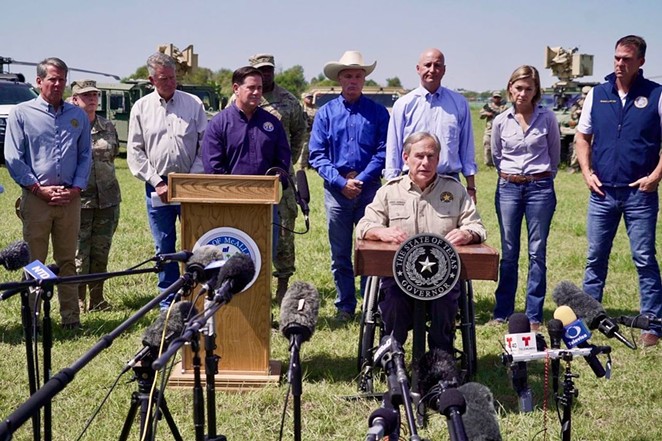 In a letter sent Friday to Department of Homeland Security Secretary Alejandro Mayorkas and U.S. Attorney General Merrick B. Garland, Castro and 25 other members of Congress requested that DHS and the Justice Department review the program, which Abbott, a Republican, has dubbed Operation Lone Star.

They argue that the initiative, which they describe as a "roughly billion-dollar Texas law enforcement program," interferes with the federal government's authority to oversee immigration while depriving migrants of due process. The letter was also signed by Austin-San Antonio Rep. Lloyd Doggett, New York's Alexandria Ocasio-Cortez and Michigan's Rashida Tlaib.

"These operations have continued to militarize Texas’ border communities and interfered with the federal immigration system, likely violating the Supremacy Clause of the Constitution," the House members write. "Even more egregiously, these programs have directly led to a violation of state laws and constitutional due process rights."

In a response to the letter emailed to the Current, Abbott spokeswoman Renae Eze didn't directly address the lawmakers' concerns but said Operation Lone Star was necessary because of the Biden Administration's "dangerous and reckless open border policies."

"Governor Abbott is addressing this crisis head-on to protect Texans and Americans alike, initiating a comprehensive border security plan and launching Operation Lone Star to combat the smuggling of people and drugs," Eze said. Until President Biden and his administration do their job to enforce the laws of our nation and protect Americans, the State of Texas will continue stepping up to secure our border and protect our communities.”

Castro and the other signatories argue that Abbott's program has created chaos and dysfunction at the border and led to the jailing of some 1,000 migrants without filing timely charges against them. What's more, the arrests have separated families in violation of federal and state law, they maintain.

Last month, a state district judge ordered Texas to release 250 migrants arrested as part of Operation Lone Star. Those individuals languished in prison for more than a month without being charged with crimes even though state law says defendants must be released if prosecutors don't bring charges against them in a timely manner.

That court order followed an investigation by the Texas Tribune that revealed some 900 people arrested under Abbott's program had been detained for weeks without facing charges.

"One county in particular, Kinney County, has had to manage over 80% of the cases, and many of the migrants there had been without attorneys for weeks," Castro and the others write in their letter. "Over the past month, the state has passed multiple state statute deadlines to file charges, and jails must release defendants without those charges filed, which has also not occurred in all cases."

As the clock ticks down to Abbott's 2022 reelection, the governor has seized on "get tough" immigration policies in a bid to stave off primary challenges from the right and appeal to Trump voters.

In addition to jailing migrants on minor offenses, he's pledged to state funds to continuing work on the former president's unfinished border wall.