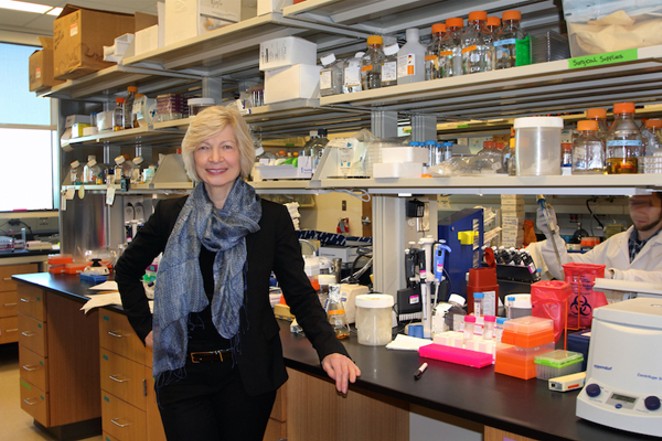 Courtesy
Dr. Ruth Ruprecht, director of the Texas Biomed AIDS Research Program
This story was originally published by our sister publication Out In SA.

A San Antonio research team under the leadership of Dr. Ruth Ruprecht has uncovered a potential new defense against HIV, the virus that causes AIDS.

Dr. Ruprecht is the director of the Texas Biomed AIDS Research Program. She and her team discovered that IgM, an antibody which is present in humans, was effective in preventing HIV transmission through mucous membranes.

Ruprecht’s discovery is significant because 90 percent of new HIV infections occur during exposure to the mucous membranes like those in the lining of the penis, vagina, rectum and mouth.

When used to combat the virus, IgM binds to HIV particles and creates a particle that is too large to pass through mucous membranes and thereby wards off infection.

The team’s discovery was tested at the Southwest National Primate Research Center where six rhesus monkeys were given a man-made version of IgM and then exposed to SHIV, the simian version of HIV. Of the six monkeys, four remained free from SHIV infection.

“IgM is actually really interesting. It’s an ancient immunoglobulin. All vertebrates have it, including sharks, birds, you name it,” Ruprecht said at a press briefing in July. “IGM has five sub-units together. So, IgM basically has five times more capability of trapping virus particles.”

Ruprecht’s findings were outlined in a study published last month in the journal AIDS. The discovery could lead the way for the future development of a new vaccine.

“We fully plan to look at this in the field of HIV and virus infections in the primate models. So, in other words, we have opened up a new field and we are excited about going into this new direction,” Ruprecht said.