Trent Anderson’s burgeoning BeeSpace, an enterprise focused on rehoming and raising honeybees, operated out of a small tent set up in Castroville before being literally torn apart by severe weather that moved through SA and the surrounding areas.

"Just got word tent is shredded from the storm," Anderson posted on Facebook late Wednesday evening.

Photos posted shortly after show the extent of the damage, including the tent — what’s left of it — as well as rain-soaked merchandise and display boxes. 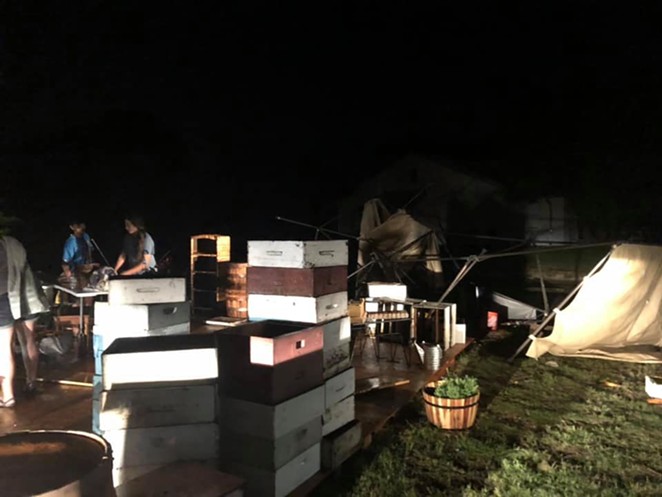 Facebook / BeeSpace
Photos posted to Facebook showed the aftermath of the storm.
Despite the setback, Anderson remains hopeful.

"I am very hopeful because people are pitching in and helping and if the community support continues we could probably build something back even better," he told the Current.

The high school sophomore spent nearly three years building his business from the ground up, working with other San Antonio-area beekeepers to gain both the knowledge and equipment to enter the world of commercial beekeeping. The shop sold raw honey, honeycomb, pollen and whipped honey, with plans to add products such as pure-beeswax candles and soaps made with honey this summer.

Those interested in donating to Anderson’s recovery effort can donate directly to the business owner via Venmo using the ID @Trent-Anderson-82.