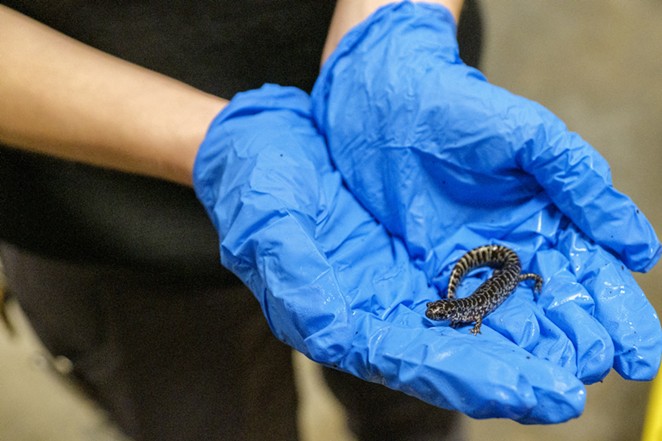 Daniel Conrad
The San Antonio Zoo's Kamryn Richard holds a reticulated flatwoods salamander.
One of the world's most critically endangered species has been successfully bred at the San Antonio Zoo after 11 years’ work and help from conservationists across the U.S.

The zoo's Center for Conservation and Research has hatched eggs of reticulated flatwoods salamanders, a species that after being decimated by development is down to a single wild habitat in Florida's western panhandle.

“The significance is simple: this salamander is down to one last healthy remaining population, in the middle of Eglin Air Force Base,” said Danté Fenolio, the zoo's vice president of conservation and research. “In conservation, the real challenge is when you get a species down to the last few individuals. A stochastic event could come in and wipe them out: a wildfire, a drought, [logging]. … We’re really down to a thread.”

The wild salamanders are webbed in silver-grey stripes that coat their brown-black bodies. They burrow underground and live among leaflitter for most of their adulthood, surfacing on rainy winter nights to breed in the acidic, ephemeral wetlands found in Southeastern U.S. pine flatwoods and savannas.

“So little is known about them since so much of their life cycle is spent underground, so keeping them in captivity teaches us about their natural history,” said Senior Conservation Technician Kamryn Richard. “We’re hoping that [by] coming up with protocols for husbandry practices and for breeding them, we’ll eventually be able to release them and increase wild populations.”

Fenolio has been working with the salamanders for more than a decade, but for years, the adults never laid eggs.

Bekky Muscher-Hodges, manager of the conservation center, checked for eggs every day for about two years, ever since the zoo team began pairing adult salamanders for mating. She tried as many things as she could think of: filling their enclosures with fake plants, native Florida grasses, new soil mixes.

But early this February, she discovered new eggs — dozens of them.

“It happened when nobody else was here. I was totally freaking out,” Muscher-Hodges said. “I’m like, happy ugly crying to myself, taking pictures with my phone.”

When a coworker came in for her shift, Muscher-Hodges was hollering “We did it! We did it!” 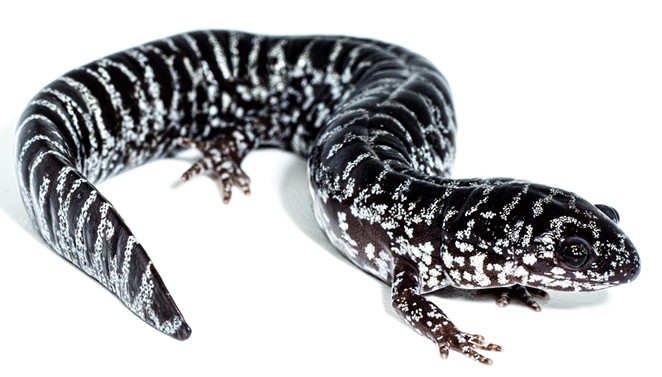 “Part of this story is that if you don’t stick with these projects, if you don’t wait 11 years to breed something for the first time, but you know in your heart that this animal needs what you’re doing and you stick with it, you can work through all these issues,” Fenolio said.

Reticulated flatwoods salamanders once inhabited Alabama, Georgia and Florida. The species was last seen in Alabama in 1981. In 2009, the U.S. Fish and Wildlife Service declared them endangered.

“These things have vanished from 98% of their former range in a decade,” Fenolio said. “The whole problem is, they’re hedge-betting … when those ponds don’t develop but [the salamanders] have already gone and laid their eggs, and if the rains don’t come in time, you’ve just lost an entire year’s recruitment for that population.”

“It’s very rare to put animals back in the landscape. That’s like the pinnacle of conservation,” Fenolio said. “That’s what we work for.”

Fenolio emphasized the teamwork required for his team to successfully raise the salamanders.

“We had some challenging skin infections that were caused by a fungus,” he added. “We were able to address that, working with our in-house vets. We have wonderful vets here that have really done a great job helping us, gave us a lifeline on figuring it out.”

“It takes a country to raise a salamander,” Muscher-Hodges added before Fenolio enumerated the groups the zoo has worked with on this project: the U.S. Fish and Wildlife Service, the Florida Fish and Wildlife Conservation Commission, Eglin Airforce Base and Virginia Tech.

The zoo conservationists are caring for dozens of adult salamanders and at least 35 eggs they're preparing to hatch. The developing larvae are visible inside the transparent spheres, tadpole-like and gilled.