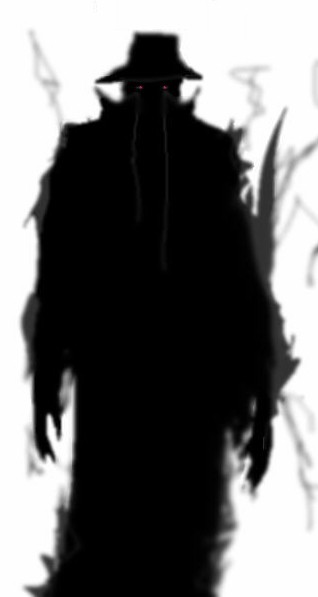 Just recently I interviewed a local woman named Stacy Alejos who related an extremely creepy and disturbing tale to me. According to Stacy, when she was a very young girl living on the far Westside of San Antonio, she was awoken one night by an uncomfortable sensation and felt eerily compelled to look out her bedroom window. As her eyes adjusted to the darkness, Stacy could clearly make out the outline of a humanoid figure standing behind the white picket fence that surrounded her yard. Though she couldn’t make out much in the way of features, she could clearly discern what she interpreted to be a “pork pie” hat atop the figure’s head. As Stacy watched fearfully, the being began to sidle in a strange sideways motion, all the while keeping its outstretched arms on the top fence post. When she noticed the audible crunching of dried leaves beneath the entity’s feet, Stacy was quite sure that she was not dreaming, nor imagining things. Understandably terrified, the young girl dove underneath her sheets, quaking in fear until morning. Her adamant attempts to wake her aunt, who was sleeping next to her at the time, were futile. It almost seemed as if her aunt had been in a trance.

This event had a profound impact on her since, as she grew older, Stacy admittedly developed a fascination with all things paranormal much to her parents dismay. Though remarkably, she also learned that her parents had claimed to have sighted an inexplicable disc-shaped object hovering above their property one night, though they didn’t like to talk about it. The utterly synchronistic aspect of Stacy’s experience occurred just recently when she met another San Antonio woman who related a nearly identical sighting to her. In fact, the other woman had volunteered the information with absolutely no knowledge of Stacy’s encounter, and perhaps even stranger still

both women discovered that they grew up in adjacent neighborhoods!

As unbelievable as it sounds, within the field of paranormal research, there are many references to specter-like apparitions known as shadow people – ghostly, black figures that appear in people’s peripheral vision and suddenly vanish into thin air. These phantoms are believed to subsist on fear and are often perceived to be bad omens.  Interestingly, there are numerous accounts of a specific shadow being known as the Hat Man, whose black fedora is immediately recognizable by all who see him. Skeptics would be quick to explain the shadow people as the product of mere hallucinations or perhaps imaginations gone wild. But, there are some intriguing theories that have been put forward to explain the phenomenon, including demonic manifestations or inter dimensional visitors.

If any San Antonio residents think they have seen the phantom Hat Man, I would love to hear about it.