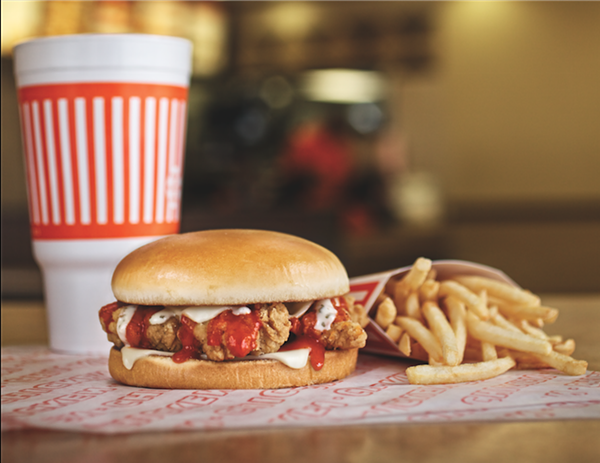 Whataburger released a new sandwich this past week, and it's a mouthful. Billed as the Buffalo Ranch Chicken Strip Sandwich, the new sando "is layered with three crispy, all-white meat chicken strips, two slices of Monterey Jack cheese, creamy buttermilk ranch and topped off with Whataburger's own Buffalo Sauce,  all served on a toasted five-inch bun."

We drove on over to our closest WB, and ordered three of the BRCS (we shorten honey butter chicken biscuit, so why not?). Full disclosure, I had a voucher from the company so I didn't have to pay the $7 or so buckaroos for the meal. The chicken sandwich stays pretty true to its advertised form: Jessica Elizarraras
Could be meltier...
The sandwich did elicit some pretty envious questions from fellow co-workers. As for the taste test portion, one taster said it was "a'ight, but the ranch was quite drippy," and another quipped he would, "recommend it to a drunk friend" and that this was "the earliest he's had Whataburger in a while." On my end, I thought the sandwich was tasty, though I've always thought the chicken strip breading is too thick (hence why I don't eat HBCBs), but much like that one episode of Friends with the trifle ... buttermik ranch? Good. Buffalo sauce? Good. Toasty bun? GOOD. It's a keeper, though it could use a lettuce leaf or two. It won't replace my "No. 5 No Onions" come 2 a.m., but I wouldn't push it out of bed either (that is how you get ants, though...).

It's around for a limited time, so don't sleep.