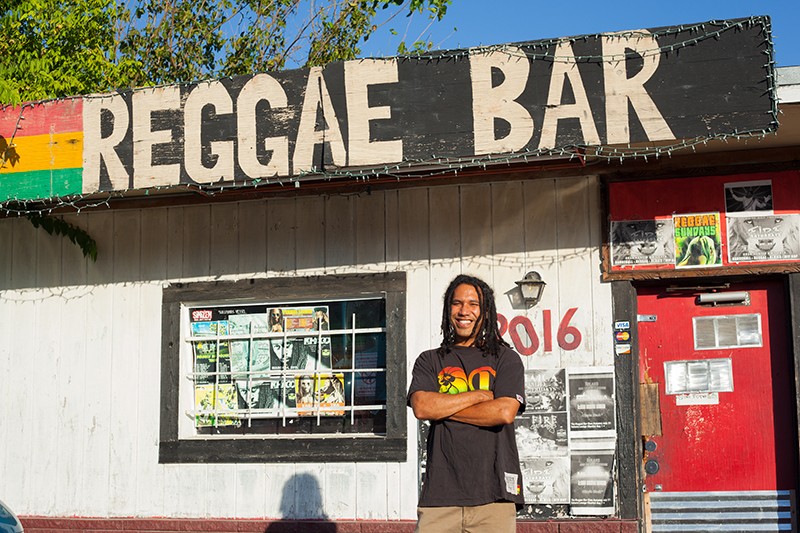 Lizzy Flowers
Kevin Hogan, of the aptly-named Reggae Bar on Austin Highway, has led the way in SA's fledgling revival of the genre Bob Marley made global.

It wasn't an easy transition for Richard "Romie" Barr when he moved from Jamaica to join relatives in the Alamo City a decade ago.

It was immediate culture shock.

"I was getting miserable and just wanted to go home," Barr, 35, told the San Antonio Current last week. "I didn't think there was anything for me here, none of my culture."

A huge part of the problem was that Barr quickly discovered that San Antonio lacked a vibrant reggae music scene — roots reggae (à la Bob Marley), not to be confused with dancehall reggae (which has a different beat and lacks a political vibe).

But was it always this way? Does the Alamo City, the country's seventh-largest city, have no room for a musical genre that remains widely popular all over the world?

Answers are not easy to come by and tend to draw mixed reactions from those in the know.

San Antonio does differ from other major cities, even within Texas, in that it has a much smaller international community than, say, Houston, Dallas or Austin.

But it's not like SA never had a roots reggae scene.

Actually, back in the 1980s, when the genre went through its heyday after Marley turned into a global icon following his death in 1981, the Alamo City had a fairly tight-knit but strong reggae scene.

The yearly Marley fest at Sunken Gardens easily drew 5,000 people. And there was at least one hugely popular reggae club, Irie's in the Medical Center, which packed crowds every weekend with DJ-spun sessions and live bands.

Then things changed — not for the better.

Internal politics among event organizers sent the annual reggae festival spinning into oblivion. Irie's changed location and crowds died down. It was shuttered.

On top of it, though it remained acclaimed across the world, interest and support for roots reggae began to wane in the U.S. in the 1990s and 2000s as young people began flocking to dancehall, hip hop and house music.

It seemed as if a perfect storm had formed to essentially wipe out SA's reggae scene.

"There has been a fundamental change in the music itself," opined Jim Beal Jr., who has covered local music for three decades and hosted a program on radio station KSYM for two decades.

That change is not just a shift in beats but perhaps also lack of interest in roots reggae's traditionally politically imbibed lyrics, narrating tales of oppression lingering from slavery days and modern-day social injustices.

But not all is lost.

Don't look now, but reggae seems to be making a comeback of sorts in SA.

Some signs of life seem to be popping up here and there, albeit without much structure.

There's an oasis on Austin Highway, near the intersection with I-35, called, simply enough, Reggae Bar. Run by Kevin Hogan, of German and Jamaican-American ancestry, some would argue it has single-handedly put reggae back on the SA map.

After many years teaching and a first failed bid at a reggae bar near downtown called Burning Spear, Hogan and some partners opened Reggae Bar in 2009.

Six years in, he's by no means raking in the dough, but he does well enough to stay open every day of the week, often bringing in live acts from across the country and the Caribbean.

Weekend crowds average around 100. A real good show pulls in 200.

"SA may be lagging, but we're coming from so far behind that we're ahead of where the culture is now," said Hogan, 44, noting that reggae club owners in Houston and Dallas now seek him out for tips.

The group's career highlight will always be performing with Carlos Santana at the Marley fest, but members don't mind a small audience.

"We love SA," said Babrow, 60. "We've been here a long time and we intend to keep playing roots, even if it's just for a handful."

It's a contagious optimism with which Josh Mundahl readily identifies.

Mundahl is from SA and has been into reggae since he first heard Marley as a teenager.

His wife is Jamaican and he has lived on the island on and off for many years. Now back in SA, he just opened One Drop Reggae Shop at 8800 Broadway and continues to perform as Likkle Shanx.

The shop offers music, clothing and doubles as a juice bar. A recording studio is in the works. It hosts a reggae night on Saturdays, as well as slam poetry readings.

As with others, Mundahl stressed that for roots reggae to make a permanent resurgence in SA, it has to become a much more organized effort.

"It's lost and scattered, but the base is there," said Mundahl, 39. "It just needs to be fed. Reggae is still a global phenomenon."

The key: sponsorship and promotion. Put those two into motion and who knows, perhaps the Alamo City will once again be home to a popular Bob Marley fest.