The team explained in a news release that the eponymous title “solidifies San Antonio’s hometown roots, and proudly represents the city among the growing soccer culture in the country. FC commonly represents Football Club in clubs throughout the globe, and specifically in Mexico, Spain and Germany, which are historically connected to the origins of San Antonio and the South Texas region.” 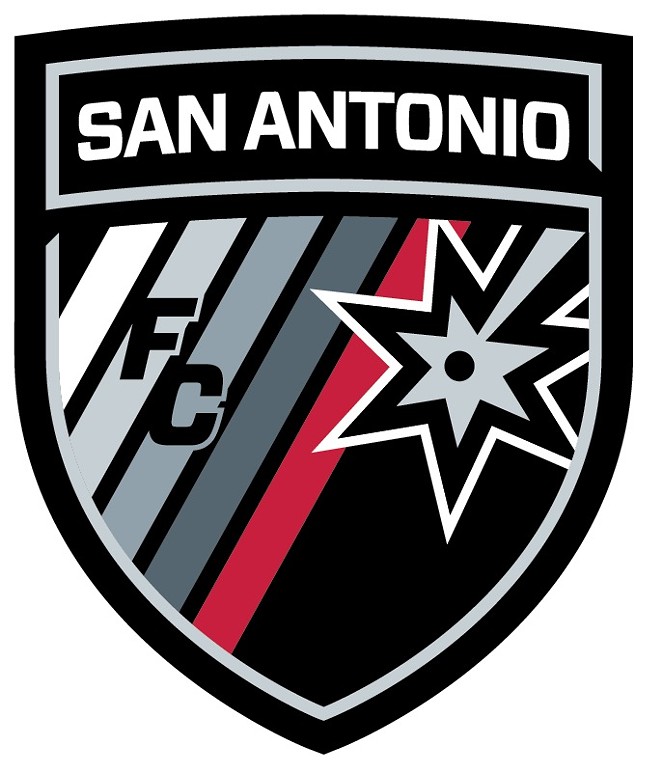 Courtesy San Antonio FC
The club’s logo features a banner of the city’s name above a spur (reminiscent of another local sports team you may have heard of) and five diagonal bands fading from white to grey to red. The five stripes are meant to symbolize the five branches of the armed forces — an homage to San Antonio’s “Military City U.S.A” nickname.

The team’s next step is to fill out its roster before its opening game against Seattle Sounders FC 2 on Sunday, April 4. The team announced four new signings on Thursday night: goalkeeper Matt Cardone and midfielder Rafael Castillo, both of whom played for the San Antonio Scorpions, midfielder Victor Araujo and defender Max Gunderson. Araujo and Cardone played soccer at Trinity University, and Gunderson played for the University of Incarnate Word.

Today, the team is holding open tryouts. And there are plenty of slots to fill.

“Does anyone play center forward?” SAFC head coach Darren Powell asked the crowd at the unveiling.

Here are some of the social media reactions from the unveiling, and to the new name and logo :

San Antonio FC ain't too bad of a name tbh. Interesting logo too...

@SAFCUSL word on the street is FC will stand for Fighting Chupacabras, it is more colorful than San Antonio football club

@geoffsheen760 @MikeTaylorShow I'm gotta be honest. San Antonio FC? I hate that name. I say the name should be BIG RED & BARBACOA FC 😅

Our new four and our new identity. #SAFC pic.twitter.com/3p8XZspfNN


The team's home opener will be Saturday, April 9 at Toyota Field against the Swope Park Rangers.