Scorpions, quicksand, and Girl in a Coma: a most interesting party 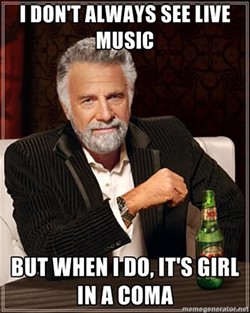 The only thing that would have made the setup of Dos Equis’ The Most Interesting Academy at Sunset Station on Thursday more surreal would have been an appearance by The Most Interesting Man in the World himself. Of course, 74-year-old actor Jonathan Goldsmith is busy reaping the rewards of the beer’s successful advertisements, but his likeness at least was sprinkled about the venue. This time, it was the consumers who got to be stars in the campaign as the event was one giant advertisement, a circus-like atmosphere with free beer, music, entertainers, and the constant reminder to do as The Man tells you to — “Stay thirsty, my friends.” The music-centric cancer charity Love Hope Strength sponsored the event, one of several Dos Equis has constructed around the country as part of its "Most Interesting Academy," an offshoot of the initial campaign. “Seekers, explorers, conquistadors and students,” the academy’s website beckons, “the journey to a more interesting you begins here.” Just as the The Man boasts of his extravagant exploits in his ads, the Academy is around to encourage fans to live out their own adventures. And drink Dos Equis. Attendees Thursday could try their hand at fencing, or have their hands covered in henna tattoos; cross a pit of “quicksand” (a mix of water and corn starch); balance on a giant, rotating log; snack on critters such as crickets and scorpions...
click to enlarge ...or create collages using posters of The Man and other Dos Equis designs, art that is surely decking walls of dorm rooms at this point. Men and women on stilts glided through the crowd outdoors, while others underneath Chinese dragon costumes danced for onlookers sipping beer at patio tables. Those manning the various stations wore matching outfits, all adorned with The Academy’s yellow crest, from safari-like duds at the quicksand stop to lumberjack looks at the log roll, complete with plaid shirts, suspenders and jorts. Some of the vendors were local — the fencers hailed from Alamo Fencing Academy — or relatively so, such as drummers and bejeweled and feathered dancers from the Austin Samba School, who briefly turned the night into a Brazilian Carnaval. Less outgoing were the hawks and owl on display from San Antonio’s Last Chance Forever: The Bird of Prey Conservancy, although the handlers promised that the eye-covering helmets the hawks sported most of the time kept them calm. Most vendors came from out of town. Gene Rurka, of Somerset, N.J., oversaw the Edible Etymology booth (with the bugs). He and his critters on crackers have made appearances at all of the Academy’s gatherings, which began in New York in 2009, and he said he appreciates not only the entertainment quality of the event but the coordinators’ open-mindedness. “This is not all fun and games,” Rurka said of his trade, as gawkers debated whether or not to eat dried worms poking out of cherry tomatoes. "Look at the country’s food shortages brought on by fires and droughts," he said. "Our supply can’t last —what are you going to eat? This could be, and I think it will be, an alternative food source.” (I opted to wait for the Apocalypse to start feeding on scorpions.) Austin-based Black Joe Lewis & The Honeybears brought their blues/funk/soul as the event’s headliners, but Girl In A Coma — introduced as “San Antonio’s heroes” — were the bigger draw. Fans called out to Nina Díaz, Phanie Díaz and Jenn Alva (sporting a newly trimmed coiffure thanks to the event’s free barber shop station) by name, singing along to songs such as the beautiful “El Monte” and the punk take on Richie Valens’ “Come On, Let’s Go.”
click to enlarge Jenn Alva getting a haircut minutes before GIAC's set.

The ladies didn’t lose their energy for a beat, an expressive Nina working the crowd and encouraging fans to support other hometown artists such as Heather Go Psycho, whose members, along with others from Pop Pistol, Langton Drive, and Bombasta were in attendance. The band's set was only 35 minutes; Nina got the signal to wrap things up from the same event worker that dragged a lewd stage-crasher away. (The over-eager fan jumped back into the crowd.) "If you see that guy," Nina said, "kick him in the butt." The Most Interesting Academy did impart some life lessons, however, as Nina wisely summed up when dedicating a song to all of those who, like her, had kicked off the evening by eating a cricket: “It’s pleasurable — and painful at the same time.” — Text and event photos by Sarah Carlson