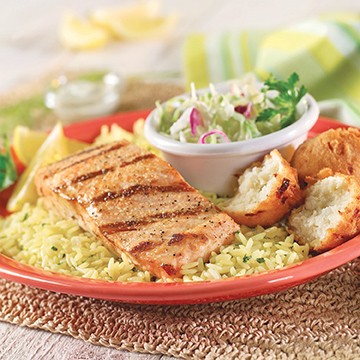 Courtesy
Salmon's on the menu, but don't forget the classics at Sea Island, which is turning 50.

Mi Tierra, Ray's Drive Inn, Los Barrios — all San Anto institutions that have stood the test of time and thrived in the tumultuous restaurant scene for decades on end. And this July, Sea Island Shrimp House joined the ranks of the five-oh club in serving hungry San Antonians for half a century. But as a non-native, it was difficult at first to find the appeal of this long-standing joint that caters to the seafood-loving crowd.

Opened by Dan and Chrissy Anthony and friend Henry Reed at the corner of Rector and McCullough, the original location has been feeding mall-goers ever since North Star Mall was but a five-year-old shopping mecca. The location built in 1965 at 322 W. Rector St. still stands and has been joined by five more — 11715 Bandera Road, 8223 Agora Pkwy., 5959 NW Loop 410, 10303 I-10 W. and 2119 SW Military Dr. — all serving the same menu. The joints' collective popularity persists yearly with Lenten season wait times going way past the hour mark, and weekends packed to the gills with shrimp lovers.

Dan Anthony's influence in the restaurant scene began at Manhattan Café on Houston Street in downtown San Antonio, opened by his father Tom Anthony. Though the eatery closed in 1977 after a 66-year run, the restaurant bug was deeply entrenched within the family. Before his death in 2001, Dan had opened the Old San Francisco Steak House with Reed, along with two other concepts and three more locations of Sea Island. He didn't do it alone — Barclay Anthony, the couple's youngest son, joined the management team in 1992, and the company's growth has continued with the opening of two Tiago's Cabo Grille locations, two more freestanding Sea Island stores and a line of seasoning and sauces. Nick Anthony, the middle son of Dan and Chrissy, wasn't far behind with the launch of Papouli's Greek Grill in 2003, which has blossomed to into three locations of its own.

After more than 10 years in San Antonio, I could count on one hand the number of times I'd been to Sea Island (any of the six locations). I didn't have that native craving for lemon pepper fish most 20-something locals might have. So I ventured in for a few visits to figure out why Sea Island was still kickin' after all these years.

My first visit was this past Saturday for a catch-up dinner with my sister at the original location on Rector. The vibe was lively, though it was still relatively early, and the crowd was a varied mix of families and couples, both young and old (after all, they've been open for 50 years). Having asked native fans for recommendations before going, I ordered the "world famous" charbroiled shrimp ($12.49) and was pleasantly surprised with my plate. Fifteen lightly breaded, skewered and citrusy shrimp arrived alongside a bed of crisp fries and spinach. Though the shrimp is available with or without breading, the plate was more than enough for one and I made out with leftovers. My sister's gumbo was chockablock with thick-cut onions, peppers, okra and then some, perfect for hush puppy dipping.

New items have been added for the anniversary celebration (including bacon mac 'n' cheese, ceviche and a grilled skewer salad) that reflect the changing tastes of the city, but my recommendations still skew toward the wthrowbacks like the Aransas Platter, which I had during a lunchtime visit to the Wurzbach location.

The establishment's seafaring digs paired with the giant plate of six wild-caught fried shrimp, two stuffed shrimp and one breaded fried whitefish filet. Too fried? Sure, but the batter wasn't entirely gut-busting, and the stuffed shrimp were crab-filled and peppery. And there weren't any seagulls to contend with on the patio. Moreover, the staff — several of them decades-long employees — was friendly and helped guide us along (I took two more newbies along with me the second time).

Lunchtime diners included patrons from the surrounding business offices, kiddos taking advantage of the playground and Baby Boomers, who were likely the first ever regulars of the local chain. The appeal is evident — the food is consistent, the staff friendly and the prices couldn't be more affordable. Pushing seafood boundaries it's not, but fans know what they're getting after each visit and you can't beat that.