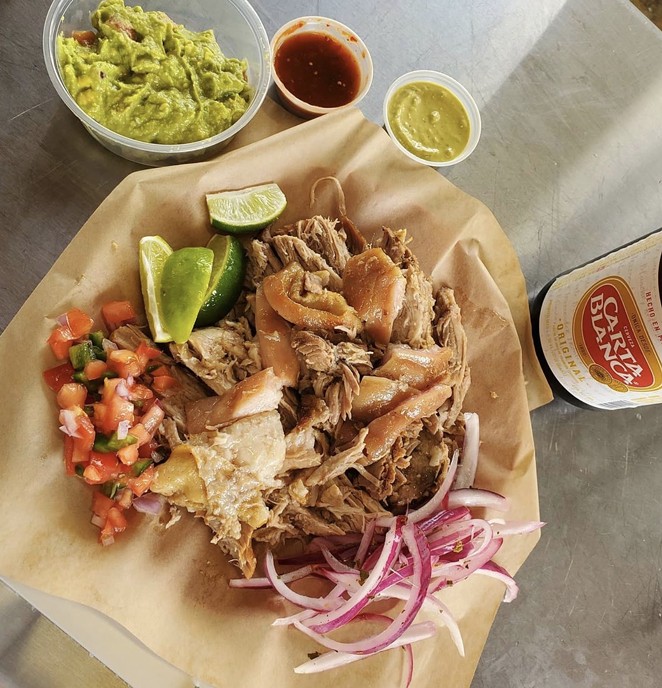 Courtesy Photo / Carnitas Lonja
These San Antonio dishes are worth going out of your way to try.
The funny thing about food trends is that they’re just as likely to be something new as they are something that’s been around for what seems like the start of culinary history.

That’s certainly true in San Antonio, where some of the most compelling dishes right now aren’t exactly newcomers to the dining scene. They’re old favorites that have either been under the radar for many local diners until lately — or they’ve been given new twists thanks to inventive local chefs.

The carnitas craving strikes about every six months or so — usually at an inconvenient time of night. Luckily, west-of-downtown eatery El Chilaquil Taqueria is a dependable source, even until 11 p.m. on weekends. Ranchero-fueled karaoke often accompanies plates of crisp-tender, deep-fried and pulled-apart pork on those weekend visits. Slather on the squeeze-bottle salsa.

When there’s time to plan ahead for carnitas, the choice is Carnitas Lonja, where the chef-supervised and succulent puerco is the main and almost only product. Have a half pound or more, and ask for the crispy parts if you like them. The carnitas are served with fragrant corn tortillas and pickled onions to go or for scarfing down in the casual courtyard. Almost as good is the eatery’s carnitas torta. Its succulent meat is bolstered by beans, and everything is tucked into a crusty bolillo. Be sure to order extra guacamole, whatever your choice of wrapper. 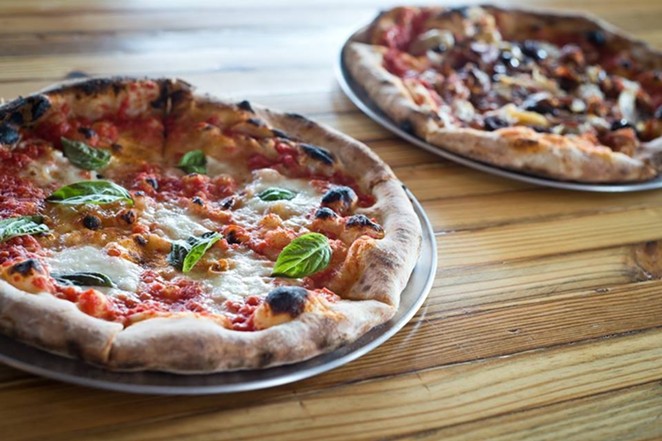 It’s tempting to think there’s nothing new left to explore in the world of pizza. America’s favorite Italian import has been folded and twisted, its crusts stuffed and its slices subjected to the indignity of ranch dressing. So, here’s a suggestion: explore the good rather than the hype.

Beyond its consistency, San Antonio’s Il Forno stands out for its handmade components, including the pizza oven, and homemade ingredients, including its cured meats. One of Il Forno’s pizza standouts is the opulent and unabashedly meaty Intero, which boasts Italian sausage, sopressata and copa. For those skipping the flesh, there’s the classic Margherita, the Verdura and the Fun Guy, the latter of which includes green onion, fontina and melty taleggio. The new-to-us Things Found Underground is spiked with preserved, above-ground lemon. 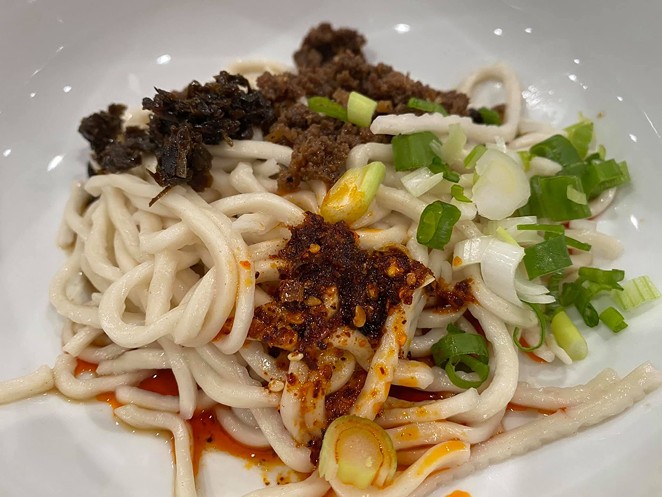 The world’s had a long time to get used to pasta since it’s thought to date close to the dawn of civilization. You’d think, then, that Americans would be more familiar with noodles beyond mac and cheese, spaghetti with red sauce, or more recently, ramen in broth.

One way to make up for this deficit is to seek out Shifu Noodle in McCreless Plaza. The modest restaurant did a bang-up job with takeout during the height of the pandemic, even spending the extra time to package some dishes’ components in separate containers to keep them from getting soggy. San Antonians are more than familiar with the Tex-Mex enchilada plate smothered in rust-colored gravy and grated yellow cheese. But what if that plate came with its payload wrapped not in a tortilla but brilliant collard greens? What if that filling were vibrant orange sweet potato with braised onion? And what if, to further confound expectations, the sauce wasn’t red but pale green and savory with smoky tomatillo and anise-scented fennel?

You’d then have the smoked mole verde enchiladas at Pharm Table, the veggie-focused eatery in Southtown. Sprouted black beans are another of the restaurant’s deviations from the San Antonio staple. No, these enchiladas may not make you forswear the original, but this delicious and healthful option may work its way into your dining rotation. 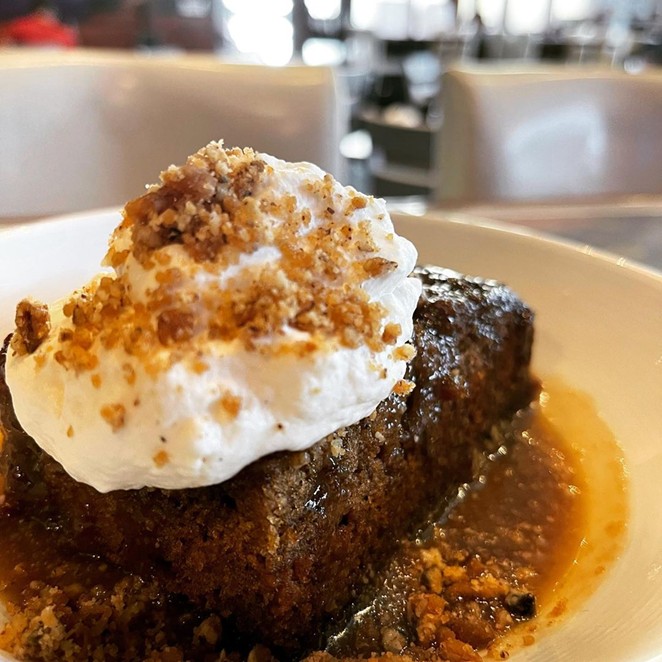 If someone asked you what the quintessential San Antonio dessert is, how would you respond? Thought so. There’s no set answer. That means the field is open to anybody’s favorite — so long as they can defend the choice loudly and convincingly. Here’s one to consider: sticky toffee pudding. Many locals first encountered the delightfully gooey and date-based dessert at Bruce Auden’s Biga. The lanky chef brought the recipe from London, and it’s been a menu stalwart ever since.

But the rendition by pastry chef Misa Holmes at Full Belly is just as good, if not better, by many accounts. With its whipped cream topping with pecan and toffee brittle on full display, Instagram evidence appears to corroborate that opinion. Sources also suggest it tastes as good as it looks. 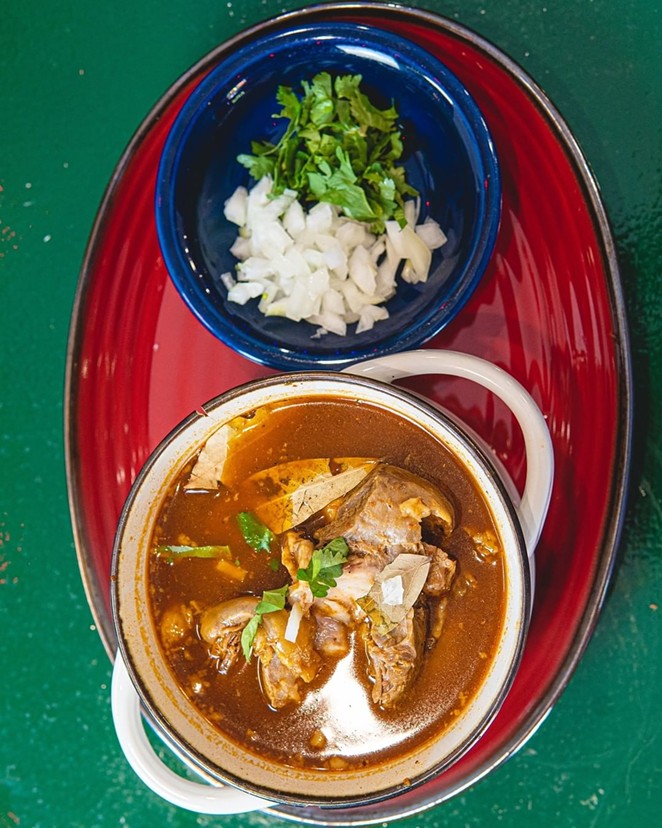 It’s been all but impossible not to notice the birria drumbeat that has become a crescendo in the last couple of years. After all, it’s been heard as far away as New York City. Whether based on beef, lamb or goat, whether folded, fried, filled with cheese, dipped or dunked, the popular dish has even allowed food trucks to develop brick-and-mortar aspirations.

And yet there’s almost unsung precedent with a much longer local history. Goat birria is an enduring staple at Cascabel Mexican Patio in Southtown. Meanwhile, Guajillo’s on Blanco Road uses lamb in its preparation.

Both are served with corn tortillas and condiments for assembling your own tacos, should you choose. Cheese is not an option. At Cascabel, the rustic and soupy dish is also called caldo de chivo, which accurately reflects its presentation.

Yes, you could do the dip, if desired, but why not give the purest form a try first? 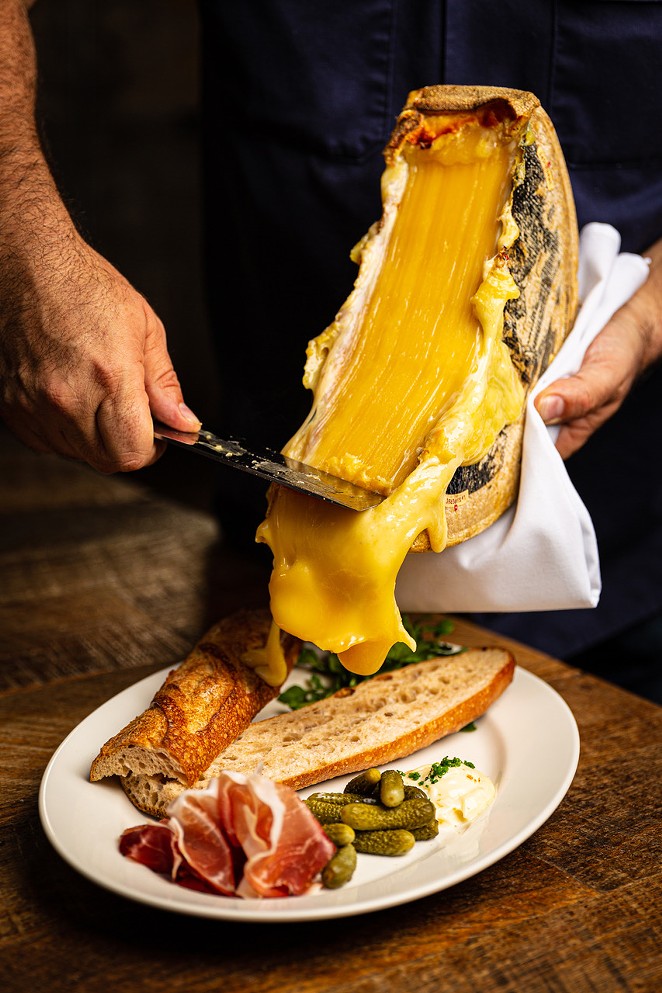 San Antonio has a somewhat spotty history with French cuisine. In what may seem like pre-history to newer residents, first there was La Louisianne and Chez Ardid, followed by Andrew Weissman’s Le Reve and Damian Watel’s Bistro Vatel. Watel’s long-running restaurant morphed into Bistr09 in a spacious new location. Now comes Brasserie Mon Chou Chou at the Pearl.

The newcomer to the bunch keeps the torch alight, almost literally, with a dish that no Francophobe could possibly disdain — think queso fundido with a soupçon of showmanship and you have the sandwich au fromage raclette, a creation of melted cheese with roots in the snowy slopes of the French and Swiss Alps. And presented tableside at Mon Chou Chou, the dish is as at home in sizzling San Antonio as it is against a snowy mountain backdrop. Settle back as your server scrapes the torched outer layer of a block of raclette cheese onto a split baguette accompanied by petit cornichons. Add a glass of crisp, dry Chenin Blanc and perhaps a simple salad of butter lettuce and shaved radishes and voila!