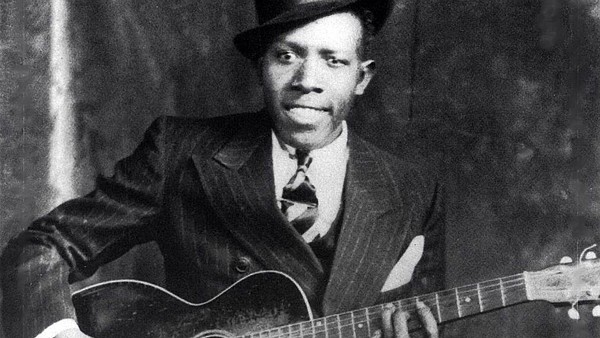 Courtesy
Johnson, in one of the three known photos of the man in existence
It's a highly contested subject, depending on what blues-heads you are talking to, but we know for sure that Robert Johnson, King of the Delta Blues and Faustian demigod, did record 27 of his classic blues numbers in our fair city in 1936. The list of tunes laid down here is a compendium of blues masterpieces given his virtuosic fingerpicking style, slide playing and fever-inducing wails and vocal jukes. When Johnson whinnies, "I got ramblin', I got raaaamblin' on my mind...I got mean things, I got mean things on my mind," ssshhhhhhhhhhhhiiiit. It's a magic that unfolds like the petals of a poppy, inviting you to trip and drowse on its beauty and pain.

In celebration of the man who was taught by Son House and peer to Charley Patton, who influenced, and is believed to have played with Howlin' Wolf* — the man in whose voice and capacity for drawing empathy and devastation from the listener influenced Sam Phillips to note, "This is where the soul of man never dies" — you can get boozed and blues-ed at Bar 414, the watering hole in the Gunter Hotel, where Johnson is rumored to have recorded the breadth of his catalogue. Notably, Steven Johnson, the grandson of the blues legend, will be performing cuts from his grandfather's canon backed by a full band. The event lasts from seven to nine p.m. and will be held on the actual day that Johnson made his landmark recordings, Monday, November 23.

This Sunday, November 22, local bluesman, historian and record collector Johnny Cockerell will be playing choice cuts from Johnson's discography along with other roots tunes from his own repertoire. The event will be held at rock 'n' roll museum/hallowed ground Tex-Pop, or the South Texas Popular Culture Center, as it's formally known.

As Robert Johnson is considered one of the first and most well-known progenitors of the blues, and therefore a firebrand for all of popular music post-Great Depression, everyone that has ever jumped around their room, comb in hand, crying along to The Boss' "Dancing in the Dark," tripped out on Disraeli Gears or torn ligaments in their neck banging along to Ace of Spades, despite the surface differences, owes some level of gratitude to the man who sold his soul for rock 'n' roll. Get out there and celebrate the mother!
*the article previously stated that Robert Johnson taught Eddie "Son" House, whereas Johnson was actually House's student.