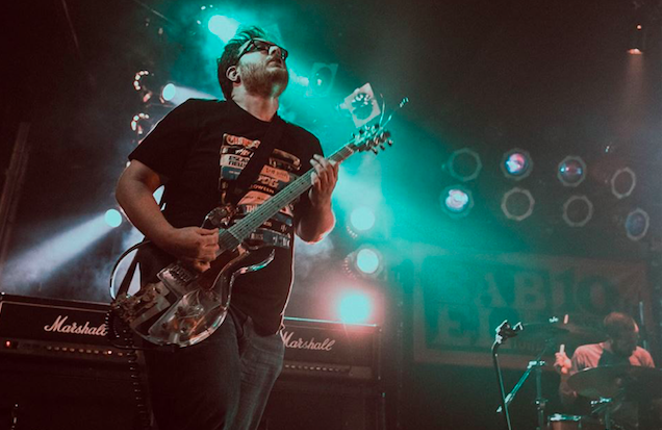 As the event approaches, we're hitting up members of participating bands to talk about the Alamo City's music scene, including its positives and negatives. Our first installment puts James Woodard, guitarist of noise-rock mainstay Grasshopper Lies Heavy in the hot seat.

How long have you been playing shows in San Antonio?

How have you seen the music landscape change over the years? Or has it stayed the same?

It’s definitely changed. I feel like it’s gotten softer in a lot of ways. I feel like the heavy music scene is in a lull right now, and I also feel like the scene is — the scene’s always had a problem with self-segregation and has been real cliquey — but I feel like, currently, it’s been over-the-top with that cliquish nature.

What do you think we can do to resolve those issues.

I think the most important thing is getting young kids to shows. Because there’s a lot of pissed-off young kids these days, and they need a release. When I was 16, 17, 18, that’s when music mattered the most to me, you know what I mean? And if it’s all just dudes in their mid to late 30s playing heavy shit, [young kids can’t always] relate to that. So, we need to do all-ages shows, get kids to shows, and hopefully kids will start punk bands and go from there

Another big problem with the San Antonio scene is that the hardworking bands are kind of forgotten about by the locals, bands like Haunter, who just put out a sick record and toured. And, not to toot my own horn, but Grasshopper’s done a lot of shit, but when like-minded bands come to San Antonio, we don’t get asked to play the Melvins show. Bookers don’t ask us to play shit like that.

Do you think there’s any responsibility on the artist’s end to reach out to promoters and ask to get put on these bills? Like, "Hey we sound like these guys, put us on this bill."

Yeah, and we’ve done that before, and sometimes it falls on deaf ears. But I don’t know. A lot of promoters, especially on the Strip will book their buddies instead, and that’s a big problem. But, yeah, the responsibility goes both ways. And I think what really helps is when bands from San Antonio go on tour, meet friends and those friends' bands come to San Antonio — that’s when I’ll book a show.

We’ve been doing the San Antonio Music Showcase for seven years. How do you think this kind of showcase makes a positive impact on the music scene? Or does it?

I think it’s positive and negative. When bands [from outside of San Antonio] are on tour, they can’t get a gig the day of the showcase. And I had a problem with that a few years ago where buddies were coming through town and I just couldn’t get them on a show. And it also glorifies bands that never get the fuck out of San Antonio, you know what I mean? [But] it also gives bands like Grasshopper, which is a pretty niche band, a chance to play in front of a bunch of people that would never come to a Grasshopper show.