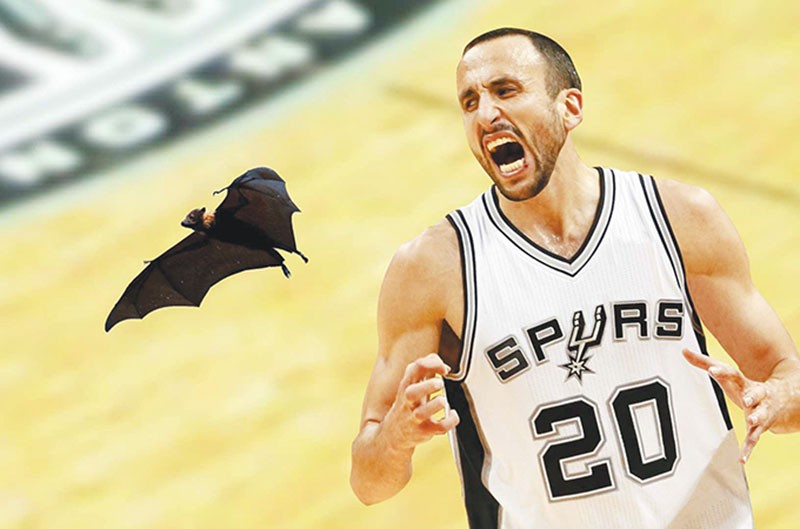 Courtesy
An animation still by Robert B. Gonzales

On a drizzly First Friday in Southtown, the familiar sounds of AC/DC bump in the cozy confines of Studio One Zero Three, where curator Rigoberto Luna has assembled the exhibit "Go Spurs Show: Paying Tribute to the Home Team." Within the gallery, itself a throwback to the neighborhood's salad days, a crowd gathers around a classic depiction of the 1973-74 Spurs roster, rendered with ink on paper by painter Vincent Valdez. Around the corner, San Antonio's twin towers David Robinson and Tim Duncan, presented by visual artist Juan Miguel Ramos in vibrantly nostalgic vintage basketball card form, garner a steady flow of cellphone clicks.

Growing up in San Antonio, some of Ramos' most vivid memories are set in the old Hemisfair Arena, where he attended Spurs games with his father. The Sexto Sol drummer remembers hearing the "Cotton-Eyed Joe" for the first time there, the less-than-intricate details of the uniforms worn at the time and the few instances that he saw George Gervin play. Then there was the night when his love of hoops and heavy metal literally bonded on an 8-inch by 10-inch glossy of the Iceman, with one side signed by Gervin and the other by WASP frontman Blackie Lawless, who was in town for a gig.

"It's a lot slicker now," says Ramos, referring to the evolution of Spurs aesthetics. "It seems to me like now they have a very corporate style guide where everything follows very specific rules, whereas the old Hemisfair days there was a little more of a raw edge to it. It was more in fitting with the whole vibe of Hemisfair Arena."

In the early '80s, a young Valdez was often in the stands at Hemisfair, also courtesy of his dad. The artist recalls spending the bulk of his time playing with his G.I. Joe action figures, and not necessarily paying attention to the games. For him, it was usually what was off the court that caught his eye.

"I remember seeing the wave for the first time," says Valdez. "In Hemisfair, it was amazing because it was like a cylinder and it would start from the rich seats and would go all the way to the nosebleeds. I remember that really caught my attention more so than the game, just this idea of a mass crowd when they really want to work together and be unified, the power of people."

Back in Southtown, soaking in the inspired pieces that make up the exhibition, flashes of David Robinson among the Big Three are not entirely surprising. After all, the core artists in the show come from a generation that was raised in Mr. Robinson's neighborhood and, like many Spurs fans, several of them have shared an encounter with San Antonio's Admiral. Luna remembers being singled out by Robinson for a brief display of one-on-one at a tournament in his youth, which he declined for fear of public humiliation. Valdez recalls meeting Robinson at a Tony Roma's in the early '90s after his father presented the burgeoning artist to the Admiral, with a portrait Vincent had sketched on a napkin.

"I had barbecue sauce all over my mouth and fingers, and I handed him this little drawing," says Valdez. "It was cool."

The longstanding metaphor for professional basketball as an artistic form has been jazz, primarily from the collective improvisation each discipline displays. When pressed to find a counterpart for Spurs basketball in the visual art world, Luna and Valdez settle on muralismo and more generally public art.

Everyone loves a winner, and eventually conversations with each artist turn to championship celebrations. Steeped in memories, each celebration further validated San Antonio for them as a city and, perhaps subconsciously, as a place for them to ultimately stay to create their art.

"By all accounts it was never like that again," says Ramos, who was stuck in the Valley when the Spurs clinched in '99. "The first one, the threshold was broken. The Spurs are finally legit in everyone's minds. The identity of the city just goes to a different place when they break that threshold and I think everybody on some level felt that."

"The greatest moment for me was the first championship in '99," says Valdez, with a mischievous smile flashing on his face. "Me and my brother jumped into his car and went downtown. We were on Commerce stuck in front of Rivercenter. It was really amazing. And then these two girls jumped into the car with us and we made out. Best Spurs moment ever."