So Much More Than Seaside Bites At Southerleigh 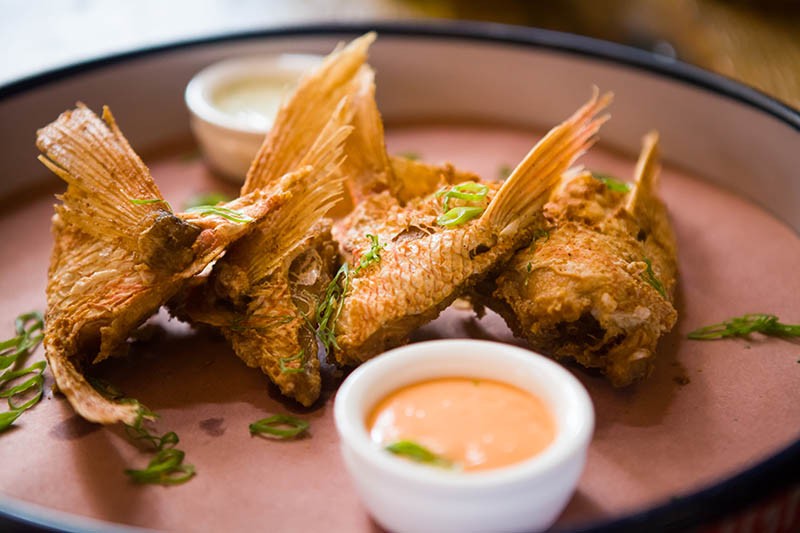 To say that the buzz surrounding The Pearl's latest eatery was deafening would be a bit of an understatement (and I say that as a willing participant). But the math on the equation that is Southerleigh Fine Food & Brewery was simple. Chef's track record? Good. Pearl's track record? Solid. Historic building to add a certain je ne sais quoi? Oh, yes. And just two months after opening, it's safe to say the eatery is getting close to meeting astronomical expectations.

Opened by chef Jeff Balfour and what seems like an army of cooks, servers, bartenders and beer-makers, Southerleigh is the chef's ode to growing up on the Galveston coast. The result of surf meets turf is this history-riddled place where badass beers like the ever-changing Darwinian IPA mingle with upscale cross-cultural fare in a leather furniture-filled casual setting. Anyone's first visit includes an at-times strong scent of malt mash — if you're lucky, you may hear a gentle whirr coming from the tanks on brew days.

Props are due to Austin architects, Clayton & Little, and interior designer Joel Mozersky of Joel Mozersky Design, for turning the 7,900-square-foot space into several distinct but cohesive eateries. There's an expansive patio (which will come in handy this fall), a country club-esque dining room, an open kitchen, a very exposed upstairs brewery, bar seating and yet another dining room for slightly more formal sit-downs. Come daytime — Southerleigh is open for lunch from 11 a.m. to 2 p.m. — photo-friendly natural light floods just about every corner of the dining area. I'll go on record — that lighting is essential for all the Instagramming you're going to do.

My first official visit to Southerleigh was during said lunchtime. Always a sucker for excellent food at wallet-friendly prices, I immediately zeroed in on the Cellerman's Pail ($12). Not to be confused with a chum bucket, the CP included tender roast beef, topped with thin and crisp shallot and a choice of side. Already a big fan of the jalapeño cheddar grits (were I Oprah, I would give them away as one of my faves), I opted for the gulf crab spiked mac 'n' cheese, to dreamy results. The market salad, also an option with the Cellerman's, was drizzled with fun vinaigrette and helped round out the meal.

It's pertinent to note one secret ingredient to the Southerleigh formula I'd be remiss to not include in this review: General manager extraordinaire Philippe Place, who — forgive my analogy — is the human equivalent of the service-obsessed candlestick in Beauty & The Beast. You can't have a bad time if he's around.

My second lunch visit, complete with lunch-size beer pours, included another Cellerman's, this time with a velvety shrimp bisque to start and the soft-shell crab po'boy delicately battered, fried and accompanied by house-made okra, pickles and a citrusy aioli.

Though it's easy to keep things relatively inexpensive, dinner at Southerleigh almost calls for blowing your budget. Here's a breakdown of my dinner visit on an unexpectedly packed Wednesday night:

Start with the deviled eggs because you'll want to take in the onion marmalade sweetness as it meets the bacon crumbles. Follow it up with the snapper throats. If you're going to have snapper throats on the menu, your staff has to be ready to answer some pretty silly questions. Thankfully, server Andy guided us through taking down one of these surprisingly meaty numbers. Take your time and savor the richness, though don't forget to add a dab of Crystal aioli.

Snack away your dinner — dishes are all family-style and the pretzel rack is too enticing to pass on the doughy goodness and crack-like beer cheese — or go for broke with one of the larger helpings on the menu. Loncito's pork cutlet hit whatever spot was left to hit, with a sweet mustard seed demi-glace that came together with roasted pork belly bites and sugary, bulbous onions.

Though I went home plenty satisfied, there were two minor grumbles. Too-cool pull-apart rolls interrupted our carb party, though they couldn't have been more picture-perfect. The other was an aesthetic note — I couldn't crack the Bananas Foster crème brûlée's caramel with the giant spoon we were given. Philippe Place would surely have found that appalling. There's plenty left to explore on the menu and I'm not about to let a spoon keep me from being a guest at Southerleigh.