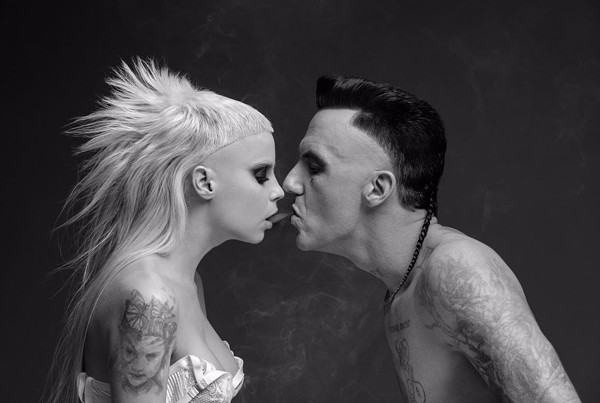 Die Antwoord's official Facebook page
Ninja and Yo-Landi Visser of Die Antwoord
Die Antwoord is probably best described in one word: "Zef." It’s not likely to ever appear in Merriam-Webster's dictionary, but the Afrikaans slang holds the essence of what makes the rap-rave duo tick. "Zef," as Yo-Landi Visser puts it, refers to “people who soup their cars up and rock gold and shit. Zef is, you’re poor but you’re fancy. You’re poor but you’re sexy, you’ve got style.”

While Die Antwoord technically has three members (Ninja, Yo-Landi Visser and beat annihilator DJ Hi-Tek), Ninja and Visser are yin and yang put into motion. Like an extraterrestrial being, Visser rocks a platinum chili-bowled mullet and raps, sings and coos like a demonic baby doll on Molly; meanwhile the swaggering Ninja (a cocky, Afrikaans-accented mic-assassin) raps often about being "well-hung." And the twosome are more than musicians. They starred in Neill Blomkamp's "Chappie" and Ninja is an accomplished artist.

In short, they're zef to death.

In preparation for their fourth album and after the release of mixtape "Suck on This," Die Antwoord's extensive fall tour, titled "The Mount Ninji and Da Nice Time Kid Tour," includes a stop at San Antonio's Aztec Theatre on October 4, marking their first time in the Alamo City.

Tickets can be pre-ordered here and will go on sale Friday at 10am.

Check out "Enter the Ninja," their first song to go viral, below: