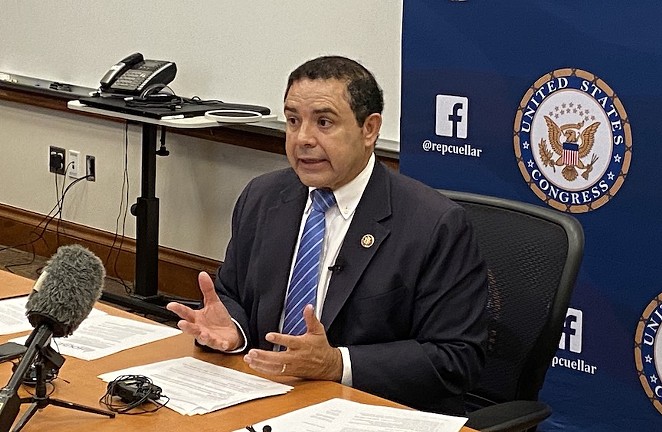 Cuellar, a moderate Democrat, said Abbott's repeated claims that the U.S.-Mexico border has become an out-of-control security crisis are untrue and actually increase the risk of violence in an area that's statistically safer than major Texas cities.

"It's a race to the bottom with this rhetoric," said Cuellar, whose district also includes San Antonio. "I know the governor, I want to work with the governor, but attacking the border? Yeah, I take it as an insult."

Last week, at a press event touting his plan for a state-backed border wall, Texas' Republican governor claimed without evidence that there are "homes being invaded" and "people being threatened with guns daily" along the border.

Recent deployments of state troopers from Nebraska and Florida to help Texas authorities in the region further escalates the potential for violence in border communities, Cuellar warned.

"Any time you bring in folks who don't understand the border, there's always the possibility for a situation down there," he said.

Cuellar also said he's also concerned Abbott's fear-mongering will make it harder for hospitals, universities and other institutions in his district to attract staff. That kind of recruiting suffered during the Trump administration's anti-immigrant rhetoric, the congressman said.

While Cuellar has criticized the Biden White House for being caught flat-footed by the crush of new border crossings, he said Abbott's promise to spend $250 million in state dollars on a border wall is a laughable commitment given the scope of the Trump White House's spending.

The congressman said it would be less costly and more effective for state and federal authorities to work together. He also recommended the U.S. work with Mexico and Central American countries for long-term fixes to the problem.

"We're playing defense on the one yard line when we should be playing it on the 20 yard line," Cuellar said.