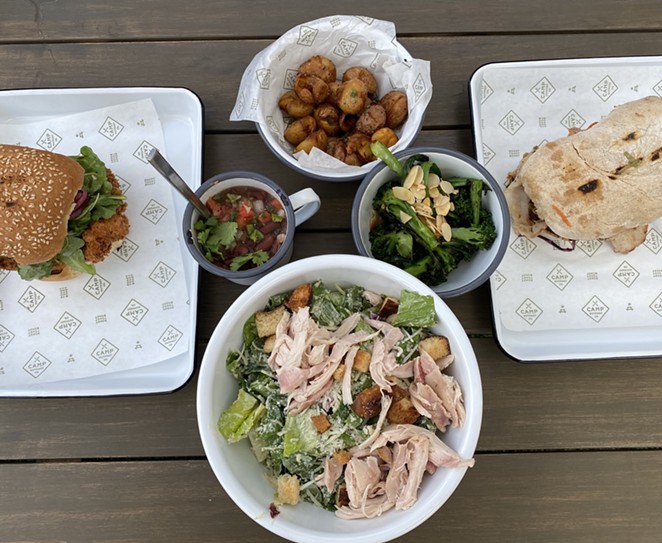 Ron Bechtol
My mother used to have a saying, and maybe yours did too: “If you can’t say something nice, don’t say anything at all.”

Admittedly, as a food critic, I long ago abandoned that maxim. But it keeps creeping back into my head as a result of this pandemic and the ensuing struggles of the restaurant and bar industry.

“Now is not the time to indulge your critical chops,” the little voice keeps saying. All the while the devil on my other shoulder has contrary counsel. “Consumers are also in a pinch, and now is also not the time to pull your punches,” it advises.

For starters, the new Southtown eatery ticks all the physical boxes. The ample outdoor space is shaded and misted and furnished with sturdy and widely spaced picnic tables. Much-reviled faux turf makes sense here, both dogs and kids seemed to appreciate it on my visits. An Airstream trailer, initially thought of as a second, outdoor bar but now destined to become a pop-up vehicle for appearances of local brewers, distillers and the like, adds a nostalgic touch. If you like, you don’t even have to enter the thoughtfully refurbished and light-filled interior, except to order. And for that, you can always designate one masked emissary from your dining party. Servers will bring your food to you, usually swiftly.

And that food is as well-considered as the layout, doubtless thanks in no small part to the experience of Dan Ward, the longtime honcho of Piatti, Camp Outpost’s parent institution. It’s not an expansive menu, smart under current restraints, but it all works — even down to the details.

Details such as croutons. I’m starting at the left-hand side of the printed menu where Camp Chicken Caesar resides. Pulled pieces of very good organic, rotisserie chicken are the titular star, but the crunchy croutons, often an afterthought, nearly steal the show. Romaine, radicchio and kale provide the textural bulk, and the only thing I might politely venture to do differently is to use less of the classic Caesar dressing.

Continuing down the menu, I’ve had all of the three sandwiches and would rank them in order of appearance. The succulent rotisserie porchetta on ciabatta is simply sensational, and its accompaniments — cabbage slaw, lemon, pickled onion and charred onion aioli — are so good that I might just have to plead for more of them.

Same goes for the pickled red onions that grace the fried chicken sando, which is no slouch in its own right. The crust is desirably crispy-crunchy, yet the bird within remains moist. A grilled sesame bun brackets this one, and my only observation — sorry, Mom — is that it, along with the house-made brioche bun that cradles the burger, both came cold one night. There’s something not quite right about a cold, grilled bun. But to end on a positive note, the grass-fed burger itself was beautifully char-crusted, and if the “secret sauce” didn’t make much of an impression, I’m sure it must have been good or otherwise I’d be restraining myself right about now.

Getting back to superlatives, I absolutely adore the smashed Yukon Gold potatoes that are available as a side. The dirty fries with porchetta drippings remind me of a barbecue I once attended at a winery in Italy, and if they didn’t quite reach that mark — the drippings there were on polenta — well, Italy is a hard act to follow.

Under the menu’s “Share” category, you won’t want to be generous with the excellent grilled broccolini with just the right amount of chili oil. However, you might be convinced to let go of a few crispy brussels sprouts with candied pecans. Of the Camp Plates, I’ve only had shares of the crispy shrimp tacos, and they’re well worth repeating.

I spent a summer during high school as a counselor at a camp for disabled children on an island in Washington’s Puget Sound, an experience, coupled with years of camping trips, that prompts the following observation: genuine s’mores can only be made over the coals of an open fire — preferably with the aid of a marshmallow-toasting stick you’ve whittled to a point yourself.

Accordingly, I’ve never ordered Camp Outpost’s s’more, one of its only desserts offered so far. Even in a pandemic, some standards remain.

But Camp Outpost offers one perk traditional camping never had: on-tap cocktails. Out of six, I’ve tried the Smoky Negroni and the Maple Old Fashioned and heartily recommend both.

Before you ask, the Highwheel Betty-spiked charro beans may come in a tin cup, but the cocktails do not.