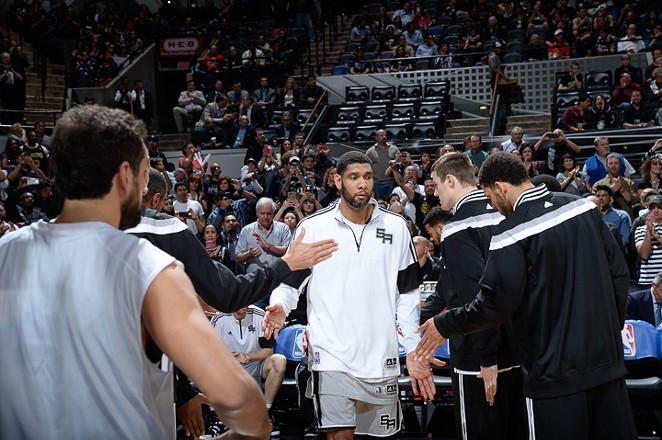 via Facebook
Cross-court bomb from Marco Belinelli
As Popovich sits the veteran stars for the benefit of their various stress points, Marco Belinelli is tearing up the court with the provided minutes, shooting above 50% from three and scoring 20 in two of the past five games. In the Spurs win over Minnesota, the Italian guard through this cross-court gem for an easy two.

Marco Belinelli with the Half-ending Dagger
Three of Belinelli's 20 points against Minnesota came in this half-ending shot—check that seperation and cross-body fade.

Tim Duncan Triple-double
In the Spurs win over Memphis, Duncan scored 14 points, 10 rebounds and 10 assists for his fourth career Triple-double. This tip-back officially put him over the ten marks.
Nick Young hits deep three for OT Lakers Win
After Kobe's thorough trash-talking of the Lakers in practice, the struggling team came out focused against the Spurs. Over Ginobili's textbook defense, Nick Young dropped this three to seal the OT deal.

Vine User Nick Squad with a Solid A- Passing Joke
Turn the volume up for this one. Vine user Nick Squad pokes fun at the Spurs passing game before Danny Green's lovely open three. Don't you know about spreading the floor Nick?

Balletic Defense Turns Into Offense
Vine user J.R. Wilco provides a different perspective on the same play, showing the wild and athletic move that got the Spurs into scoring position.

Pissed-off Popovich
It's the same old song and dance from Coach Popovich and the media—we're going to keep asking gimme questions and he's going to express his disdain as directly as possible. If only he realized that his awesomely grumpy answers just feed the cycle.