Stanford Band Messed with Texas During Alamo Bowl, But Whataburger Clapped Back 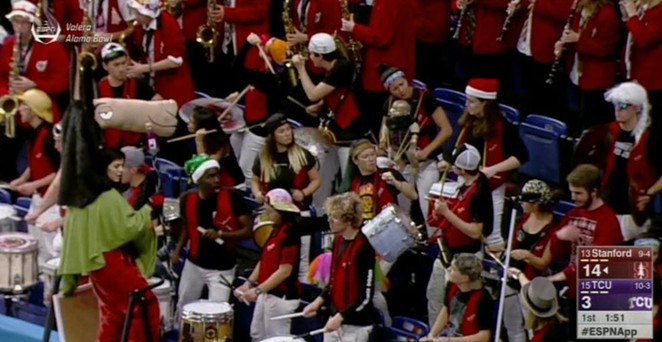 Cork Gaines / Twitter
Apparently the Stanford University marching band has never heard the slogan "Don't mess with Texas," since they did just that during the Stanford - Texas Christian University Alamo Bowl Thursday night.

During the band's halftime performance, the visitors from California poked fun at the Lone Star State with a show titled "True Facts About Texas" that has some major satirical vibes (including forming the words "FAKE NEWS" on the field).


"Texans are so humble that they only made their Capitol building a tiny bit bigger than the nation's Capitol!" Um, we used to be our own country. So heck yeah we made it bigger!

"We can't forget about homecoming mums, no matter how hard we try!" So disrespectful.

The show also weirdly brought up Donald Trump and his proposed border wall, saying the money could be used to "pay for the tuition of about 20 million college students."  Which ...we don't disagree with. What Texans (besides the trolls in our Facebook comments) even support Trump's wall? Apparently Stanford thinks we're all anti-immigrant Trump fans? Cool.

But we all know how savage Whataburger can be. The burger chain clapped back on Twitter with this:


Nothing but respect for my president.

@Whataburger hey guys sorry we started on the wrong foot. You’ve opened our eyes. Hope it’s all whata under the bridge. pic.twitter.com/VrF2sBby8j