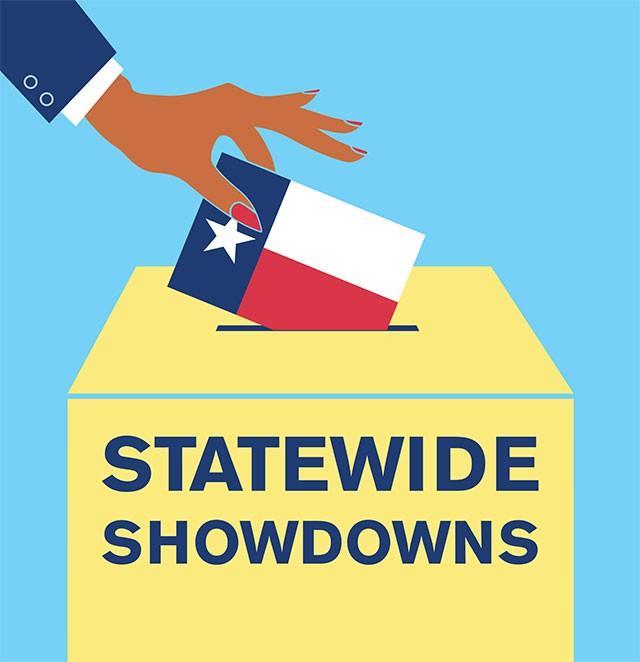 With less than a month until the November 4 general election, we thought we’d take a break from the local mayoral race and round up the latest on the two important statewide races: Texas governor and lieutenant governor.

Major-party gubernatorial candidates Wendy Davis, a Democrat from Fort Worth, and Republican Attorney General Greg Abbott, have spent the last few weeks hitting each other on ethics issues and will likely continue the attacks leading up to Election Day. Davis has focused her attention on Abbott’s involvement as state attorney general with the Texas Enterprise Fund, a de-facto slush fund concocted by Gov. Rick Perry to award funding to businesses interested in moving to Texas. The fund was recently the subject of an independent audit that uncovered shady business with some of the contracts. Abbott, ahead of Davis by nine percentage points in an independent poll, has attacked Davis on a similar front, alleging she has gained personal and professional wealth from the fund.

In the race for lieutenant governor, Democratic underdog Leticia Van de Putte has the tough task of closing a 14-point gap with Republican opponent Dan Patrick. Patrick finally came out of hiding in late September, holding his first press conference since last May to flaunt his business friends. Patrick’s first television spot hit the airwaves recently, a 30-second video warning that ISIS terrorists are coming to kill us all, while Van de Putte’s English and Spanish ads, running in a handful of media markets, focus on education and her family’s story.

Both Republican candidates are winning in the most recent independent poll of likely voters, conducted in mid-September by the Texas Lyceum, and with their latest fundraising totals the Republicans are better positioned to buy more television ads into November than the Democrats. The real win for the Democrats this election might not be the seats themselves, but the voter turnout needed to make this state competitive again. More on that in a few weeks.