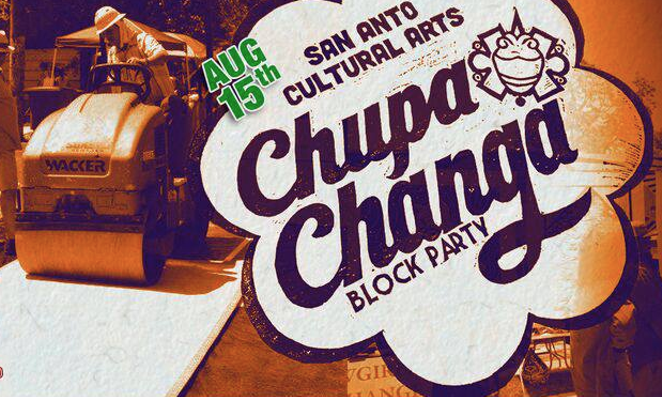 Based on its name alone, how could anyone pass up on tomorrow's end-of-summer block party put on by San Anto Cultural Arts?

Yes indeed, talking about none other than Chupachanga.

In keeping with its tradition and fare, the event is all about having fun with art.

And about keeping it original – stating with bringing in a steamroller.

Large-scale prints by artists Sabrina Alfaro and Juan Miguel Ramos will be made using a steamroller.

Not kidding. Check it out:

Alfaro is a summer intern at San Anto, about to head into her senior year pursuing a Bachelor of Fine Arts at UTSA.

"It's been a great summer at San Anto and this is a fun way to celebrate all we've accomplished the past few weeks," Alfaro said in a news release from the iconic West Side nonprofit agency.

Ramos, a co-founder of San Anto from back in the day, is a teacher and has a Master's of Fine Arts from UTSA.

The block party is free and open to the public. It takes place tomorrow from 11 a.m. to 3 p.m. in the Galeria parking lot of the Guadalupe Cultural Arts Center at 723 S. Brazos St. (intersection with El Paso).

San Anto was founded in 1993 and became a nonprofit four years later. A leader in the city's push for a bigger artistic presence, the organization is best known for its community newspaper, El Placazo, as well for its ongoing mural and public art program.