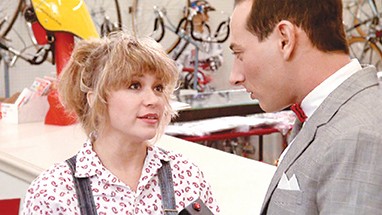 Pee-wee didn't give her the time of day at the beginning of Big Adventure, but Dottie's sweet disposition and all-around cuteness could not be ignored. Actress Elizabeth "E.G." Daily portrayed the adorable bike shop employee in the 1985 movie. The Current caught up with Daily, who has also been the voice behind the Rugrats' Tommy Pickles since 1991, and talked about Dottie's relationship with Pee-wee and why she finds drive-in theaters so romantic.

When you think back to shooting Pee-Wee's Big Adventure, what do you remember most about the production?

I didn't know much going in. I wasn't sure what I was going to get. I just knew I booked this thing and that it was a big project because there seemed to be a big buzz about it. I really didn't have any expectations. I remember someone telling me there was this new director (Tim Burton) and he directed this short film about a dog (Frankenweenie) and that he was really up and coming. I remember him being this really interesting, artsy guy. I remember he was very detailed about everything. I remember the sets were really cool. I had no idea it was going to be so huge. I'm always pleasantly surprised when I just go in and do my work and a year later I find out that it blows up.

When you landed the role of Dottie, you had been in the industry for some time. How would you describe where you career was when you got that break?

From about the time I was eight to when I was 16, I didn't book anything. I really paid a lot of dues as a kid. By the time I graduate high school, somehow I had become the It girl of the 80s. I ended up doing one film after the next. Something clicked. I wasn't the commercial looking girl. I was sort of ambiguous and quirky. I was more cute than glamorous, which worked for me. Dottie had to be a little quirky. I started to make my mark as this quirky, comedic girl next door.

Dottie is pretty lovesick for Pee-wee in the movie. What do you think attracted her to him in the first place?

Well, he's his own man. He's was very independent and determined and sweet. He was an animal lover. He had his own style, which is sexy. I liked his bowtie and his shoes and the little wave on the front of his hair. I liked the whole package.

Why do you think he played so hard to get?

I think he was distracted by his priorities, like his bike. Sometimes girls aren't the priority, although ultimately they become the priority.

When is the last time you went to the drive-in theater? Do you find them particularly romantic like Dottie does?

Yeah, we just did this outdoor movie theater on our yard, which is huge. It was set up like a drive-in. We had fire pits and people brought lawn chairs and blankets. There's something super cozy about that. There are the elements of being outdoors and you're watching a movie and there are people near you. I think it's super sexy and sweet.

Does it surprise you that Paul can still pull off this character today at 62?

What was your initial reaction when you found out Judd Apatow was going to produce a new Pee-wee movie?

I was really happy for him. I touch base with [Paul] sometimes, so I knew he was doing something new. I was super happy to hear about it. He's so talented, it's a shame he hasn't done more. I'm super proud and happy for him that he has this new project.

Pee-wee and Dottie rode off together in Big Adventure, so why isn't Dottie in the 1988 sequel?

I think it's because Pee-wee is just having some different adventures. People come in and out of your life. People go off and do other things. [Big Top] maybe didn't have a place where Dottie was appropriate. I think it's good that he branched out.

Did you get to meet Morgan Fairchild since she plays a version of Dottie?