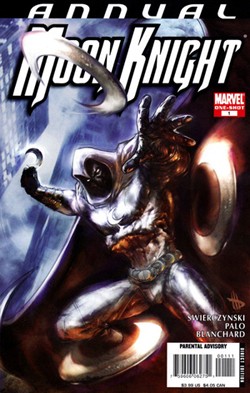 The problem with Moon Knight is this: He has a really cool costume and a terrible, terrible back story. Crime-fiction writer Duane Swierczynski (who’s penning the new cable series) apparently feels the same way, and decided not to screw with actually writing a Moon Knight story. What we get instead is the semi-disturbing tale of a serial date rapist in which Moon Knight is basically a non-speaking, nearly incidental character — a plot device. While the attempt to write a gritty, Punisher-type story while maintaining a friendly “Teen” rating sometimes makes for a strange read, the bigger problem here is that the story of a man drugging women and leaving them bleeding and bruised when they wake up should probably always be rated “Mature.” Fortunately, though, this book probably won’t appeal to impressionable young comic readers (if there even is such a thing anymore) or anyone else really, for that matter. A D-list comic-book character with a ridiculously confusing back story probably won’t ever be in much demand, cool costume or not. And Swierczynski’s decision to make Moon Knight a shadowy deus ex machina makes the story easier to follow, but not really any better. Keep your four bucks.

But while Moon Knight struggles to cram an adult-themed story into a “Teen”-rated book, Captain Marvel (or Brian Reed, rather) manages to comfortably discuss a mature theme (death) in a book not only rated
appropriate for “Ages 9 and up” but, judging by the abundance of kiddie-toy ads, actually marketed toward young children. Don’t let the ads fool you, though. I was initially annoyed to see Captain Marvel, who has for the most part remained commendably (and unusually, considering he’s a comic- book character) dead since his fatal bout with cancer in the early ’80s, but the direction Reed’s taken so far almost makes up for yet another “shocking” return from the grave. Apparently, before the captain died he got knocked forward in time to the present Civil War crises. OK that sounds pretty lame, but a truly sadistic twist — he not only knows that he will die of cancer in the past, but has to ensure that it happens to keep from screwing up the future — saves this from being just one more cheesy cheat of the Grim Reaper. Issue one is mainly concerned with setting up this scenario, and is thus fairly dialogue-heavy for a good cape book, but the excitement of the potential for a sweet and intelligent story with really cool-looking art is too good to pass up. While the odds are still in favor of subsequent books in the miniseries screwing this up with weak cop-outs and Negative Zone crap, we can at least pretend for now.

Has there ever been a comic-book title that unintentionally sounded more like gay interracial pornography than Hawaiian Dick: Screaming Black Thunder? Hawaiian Dick is a pretty popular title considering nobody’s wearing spandex on the cover, but pick up this issue at the comic shop, and you’re pretty much guaranteed some funny looks from the more mainstream fanboys. Don’t worry though — the raunchiest thing here is a set of topless female salt-and-pepper shakers, and the Screaming Black Thunder is a squadron of fighter pilots, not a buff black beefcake. But is the comic itself worth the stares? So far, not really. The story — the SBT is attacked at an air show by a World War II Japanese fighter plane, and Byrd (the Hawaiian Dick) investigates — has potential, but other than a vague reference to Hitler, there isn’t a lot going on here, and Byrd’s transformation from a hardened alcoholic detective to a childlike airplane fan is weirder than that Hitler stuff. Don’t count this normally awesome title out yet, but honestly, so far gay, interracial porn would probably be a lot more interesting. • 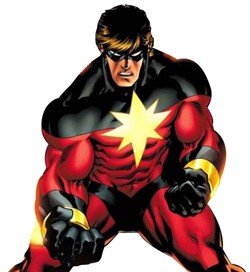