Survivor's Tale: He Escaped A Mass Kidnapping In Mexico That Made Global Headlines 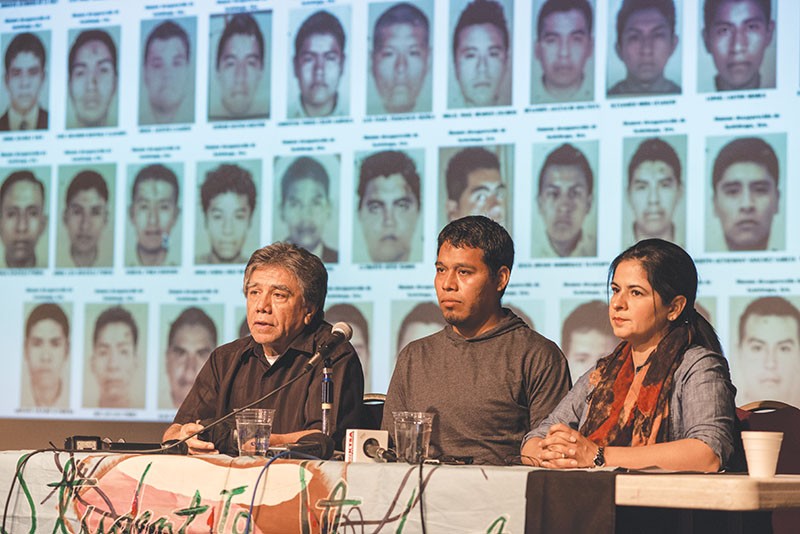 Sarah Brooke Lyons
Omar Garcia (left, in the middle) survived a mass kidnapping last year in rural southern Mexico, but his colleagues may not have. Garcia's taking the case to an international court in DC.

The only reason Omar García is alive is because he stayed behind to guard the bus.

More than three dozen fellow college students may not have been so lucky that mid-September night in rural southern Mexico.

"All of us were on our way to Iguala. We were going to collect funds for our organization, but in the process we were attacked by the local police," he said.

García, who describes himself as a peasant farmer from Ayotzinapa, in the southern Mexican state of Guerrero, survived a mass kidnapping last year that made international headlines.

[Slideshow: A Survivor Speaks: 14 Photos Of The Ayotzinapa Caravana In San Antonio]

The whereabouts of his colleagues, 43 students abducted by police in Guerrero, remain unknown, though they are presumed dead. They were all studying to be teachers and were in Iguala to raise money for their college.

García is now traveling throughout the U.S. with the "Ayotzinapa Caravan," a group of activists, survivors and parents of the abducted students. They're making several stops, including last week in SA, to raise awareness about the case and the need to end violence stemming from the ongoing drug war.

Their destination is Washington, D.C., to take their case against the Mexican government to the Inter-American Commission on Human Rights — an international organization that takes up and issues non-binding rulings on human rights violations across the Americas.

María de Jesús Tlatempa Bello, the mother of one of the abducted originally slated to be in San Antonio, was detained by U.S. border agents in the Rio Grande Valley. Her travel documents were eventually confirmed and she later rejoined the caravan.

At the Guadalupe Theater and Trinity University last week, García recounted in detail that awful night in Guerrero.

"As we were guarding our vehicles, around midnight, men with masks showed up, shooting at random," he said. "In that exchange of fire two of our brothers got killed."

The following day, he said, they found one of their friends who went missing during the nightmare — a grisly discovery.

"We found his body defaced. They pulled off his skin from his face," García recalled.

Nine were killed that night and two others remain hospitalized, he said, one of them in a coma.

The Mexican government claimed the students are dead and the mayor of Iguala and his wife are accused of ordering the abduction. García, however, doesn't trust the government's investigation or its conclusions.

"We believe the mothers and the fathers of the 43 students that disappeared — deep in their hearts they believe they are still alive," he said. García also believes his colleagues remain alive.

Those students, however, represent but a drop in the bucket in terms of the overall count of abductions and killings in the drug war in Mexico, which has deep U.S. ties.

And that toxic atmosphere isn't just a product of Mexico.

"We would like the people of the states to understand that many of the things occurring in Mexico, of which we are victims, the violence, etc., they don't start in Mexico," García said. "They start as a result of the foreign policy the United States has toward Mexico."

Katsuo Nishikawa, a political science professor at Trinity University, is also critical of U.S. foreign policy, particularly the Merida Initiative. Since 2007, the program has given the Mexican government more than $2 billion to combat drug cartels.

"It's empowering the authoritarians," Nishikawa, who was born in Mexico, explained.

Those funds are used to buy weaponry and military equipment, which is then used by soldiers and police to commit summary executions and enforced disappearances. Yet leaders in Washington remains mostly mum these days on Mexico while the drug war continues to tear the country apart with violence often spilling to the U.S. side of the border.

"Why is the U.S. government so silent about these shenanigans happening just next door?" Nishikawa asked. "Was there a deal here?"