SXSW for free: A poor fan's guide to doing the SXSW Music Conference

Send a News Tip
The chances for entrance into audiophile heaven grew smaller and smaller as the days inched closer to the musical Mecca known as the South By Southwest Music Conference.

Although a veteran of several music festivals, I'm relatively new to these Texas parts and my contact list had been growing at the pace of a Portishead album. Meaning, I had little in the ways towards obtaining the golden SXSW ticket: a media badge that run regular spectators a paltry $650.

My salvation came a few weeks before the festival. I was in Austin to see Australian band Cut Copy perform at Stubb's BBQ, ground zero for all things SXSW. I brought up my quandary as I chatted with a table of newly found acquaintances introduced by a friend before the show. Zach, one of the guys at the table, happened to work in the local music industry and gave me the scoop: no badges or wristbands are necessary to experience SXSW.

The key, Zach told me, is to RSVP to all the free parties going on during the four-day music bonanza. All of the daytime events are open to the public and there are plenty of free night shows that don't require the exorbitant festival entrance fee.

We exchanged emails with his promise he'd send me a link to a coveted list of the free parties going down that week. The rest of the work was up to me. The next day, after a great performance by one of my favorite new bands — do yourself a favor and pick up a copy of Cut Copy's In Ghost Colours if you haven't already — my Gmail account contained the Holy Grail of SXSW free shows. At an astounding 34-pages, “The List” document was massive, overwhelming and awesome. I admit, I held my breath in giddy excitement for more than a few seconds at first glance.

That got me thinking. Could I do SXSW for free? Could I do it for under $100, without a wristband or media pass? Could I bypass the registration lines and crowds waiting for their multi-hundred dollar, color-coded laminates and party just as hard?

I spent hours upon hours filtering through “The List,” honing in on the good stuff, picking out which bands I wanted to see on particular days. Little by little, an itinerary built, dozens of acts playing over downtown Austin over four glorious days, costing me only a measly email address most of the time.

Would I be turned away from some shows for not having a badge or wristband? Sure. But would I get to see a boatload of great acts for no admission fee? Hell, yes. Would I get to chow down on Texas BBQ for no pennies? Most certainly. Would I be handed a bunch of merchandise I will most likely throw in the trash later that night? You can bet on it. Would I see Hollywood celebrities attempting to up their public cred-factor? Probably so.

When it came down to it, the music mattered most. Nothing would stand in the way of a fan and his musical fix. I'm would show others its possible to get the SXSW experience without having to be a musician, manager, liquor rep, publicist, or record label executive, badge around neck, all high-and-mighty, acting like they're better than us (while we seethe in modest jealousy). With a few bucks in my pocket, some resources, and a plan, I sought off to garner a big bang for little bucks at the best music industry conference in North America. Bring it on. Off to Austin.

Five bands I want to see and the chances I'll get to see them for free:

The latest in It-Bands from the UK, White Lies actually live up to the hype surrounding the lavish and exciting debut No. 1 album, To Lose My Life. Singles “Death” and “Farewell to the Fairground” are surefire hits amongst fans of Interpol, Echo and the Bunnymen, and Joy Division. Perhaps not coincidentally, the album drops in the U.S. this week and they're on Letterman on March 24. This band is going to be huge.

Chance of seeing this act play at SXSW: 65 percent. Not a sure thing due to the growing buzz around this band. The venue will be packed and word is the Filter party cuts-off the list at 2:30 p.m. although the band isn't due to play around 5:00 p.m. That might not be such a bad thing as other fantastic UK bands The Whip and Razorlight play before them and there's free BBQ.

Canada's finest and most hardworking DJ, Paul Murphy was already famous in hip-hop circles before he produced Buck 65's 2007 release Situation (earning him a Producer of the Year nomination at the Junos, Canada's answer to the Grammy Awards). A wizard on the decks, this guy does things you only see on YouTube. I still don't believe I actually once opened for this dude when I DJed. I'm the Imperial Star Destroyer and he's the Millennium Falcon — he's light-years ahead of me. If you don't believe it, check out this clip from one of the three times he won a little DJ competition called Scribble Jam:

Chance of seeing this act play at SXSW: 50 percent. We're on a first name basis. I've written bunches of stories on the guy. I practically made his name, so he damn well better let me in. Unfortunately, the only party I know he's playing, the Red Bull Moon Tower Party, is invite only.

3. Echo and the Bunnymen 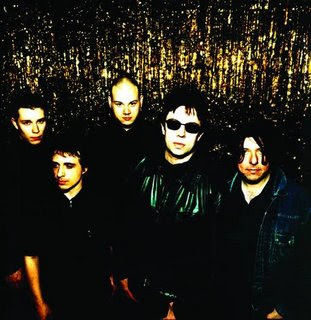 Every year at SXSW, there seems to be a band that the music industry acknowledges as “the Shit” AKA “We wouldn't be here without you, now we're making you headliners at our festival.” It's about time Ian McCullough and company get some recognition, and it only took 30 years after they formed in Liverpool in 1978. There would be no post-punk movement - no Joy Division, no U2 (maybe that's not such a bad thing), and no Interpol - without these guys. Most of you know them as that song in Donnie Darko (“Killing Moon”). True music aficionados know them much better. To all those kids out there wearing black with funny hairstyles, listening to depressing music, these guys started it. Pay your respects.

Chance of seeing this act play at SXSW: 20 percent. This is the act to see at SXSW 2009. All shows are strictly nighttime, badge and wristband only. I will have to beg, borrow, or steal someone's credentials to get into any of these shows, but I might have an in with the Rusty Spurs venue, an event that might be RSVP. Fingers crossed.

Jack White's least-favorite band, Detroit's the Von Bondies return after a few years off with the awesomely named album, Love, Hate, Then There's You. A few members have left, a few have joined, but at it's core the group is Jason Stollsteimer, a banshee of a lead-singer and guitar-player that continues the fury of 2004's Pawn Shoppe Heart, with an added dose of Jesus and Mary Chain to the already sharp garage-rock attack. SXSW is the quartet's comeback party.

Chance of seeing this act play at SXSW: 75 percent. I've RSVPed to the Little Radio Party, so as long as I show up early, I should be in.

5. And You Will Know Us By The Trail Of Deadâ?¦ I had to have an Austin band on here. Trail Of Dead is lucky in the sense that they know everyone in Austin, therefore can play anywhere they want, at pretty much any time they want during SXSW. They just released their latest, Century of Self, a supposed return to form after a few major label albums. I've been dying to see this group live since I scored their excellent debut disc for a dollar in a bargain bin whilst living in Canada.

Chance of seeing this act play at SXSW: 95 percent. Free or not, if I don't see this act at least once at this year's festival, I've failed as a music writer.