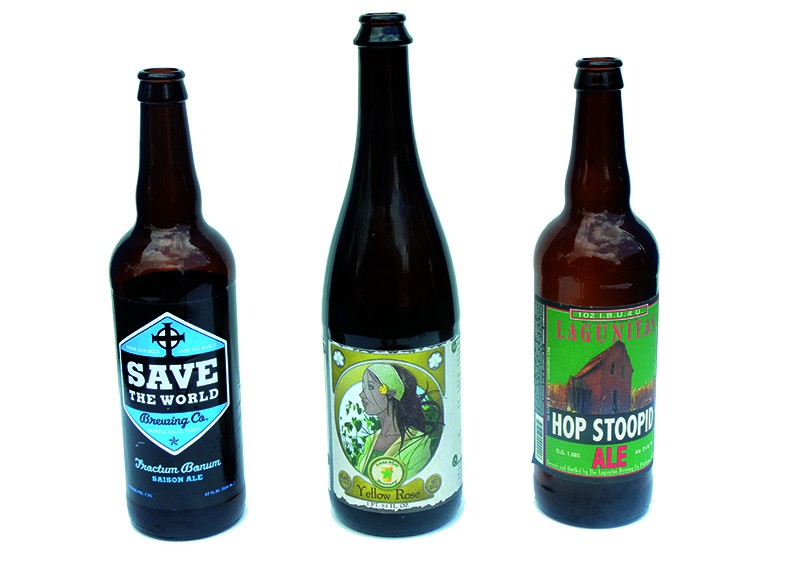 This month, your humble beer correspondent joins the 21st century with the first episode of Tapping The Conversation, the San Antonio Current's beer podcast. I'll be hanging out each month with a rad lad/lass from the SA brew scene and one regular denizen from our city's ale-loving audience to share our favorite bottles and swap stories about cultura de cerveza pura artesenal. This month features Station IPA slinger Sandy Duff, Schertz-based aficionado Paul Frost and myself holding forth on our respective favorites.

LH: Sandy, how are you doing today?

SD: I'm doing pretty good. Enjoying this Hop Stoopid you got for me.

LH: Indeed. And what is it that you love so much about the Hop Stoopid?

SD: Lagunitas Brewing out of Petaluma, California is probably one of my favorite breweries out there. Hop Stoopid is their double/imperial IPA. I think it's 8.2 percent (ABV), really high on the IBUs — this one sits at 102, which is really high on the bitterness scale.

It's a really smooth-drinking double and doesn't have that really strong alcohol taste that keeps you from wanting to keep drinking it. Honestly, this is the biggest beer I can drink that doesn't give me a hangover in the morning.

LH: You heard it here first, folks — no hangovers guaranteed.

LH: No guarantees. Paul, what do you have today?

PF: I have a saison from Save The World Brewing — I'm not even going to try to pronounce what they have here (Froctum Bonum, Latin for "The Good Fruit").

It's a fairly new brewery. I think they have seven or eight brews they're putting out right now, based out of Marble Falls. I've read a little bit about their brewery and what motivated these brewers to get into the business — [owners Dave and Quynh Rathkamp] were doctors and realized that we have a lot of issues in our country that don't even qualify as issues in other parts of the world — [they] realized that and found a higher calling. Much of the proceeds from this brewery go to various causes to help people around the world.

LH: On to me, then. I have found apparently something of a shelf whale — the Yellow Rose IPA from Lone Pint Brewery, which is based in Magnolia.

I've heard a lot of awesome things about it from people whose beer opinions I respect on the World Wide Web and grabbed it. It's super well-balanced — I'm definitely tasting a lot of Citra and a little bit of Amarillo hops (author's retraction: this is actually a single hop IPA th at only uses Mosaic.

I will be retraining my tastebuds this month). Aside from the hoppiness, there's a little bit of citrus, a lemony quality to it. It's super-light, 6.2 percent ABV or so, in a champagne bottle. I don't know if I could do the whole thing myself without after-effect, but definitely something really rad and worth sharing.

SD: I really like this Yellow Rose you have. We've had it a couple of times over at the bar I work at (The Station Tap Room) and back when I was working at The Friendly Spot. To a lot of bartenders, it is the cream of the crop of Texas IPAs. It's so drinkable, not too bitter, but does have enough bitterness to catch you.

A lot of the IPAs I've had from here are more in the English style — malty, not very hopful — and this is kind of between those two.

PF: It's got a flavor you're not going to find in a lot of other IPAs — almost a fruity flavor, which you don't normally find. I showed up at the brewery last year — I just kinda showed up and started drinking their beer, they were real cool about that — and they had a few other beers flowing pretty freely.

They had been selling for a little while, but started rolling back their distribution — kind of a Jester King-type thing, where people are willing to make the trip there rather than them having to take the beer to the road.

We've printed the most taste-related parts here, but if you care to hear opinions about recent label approvals, reliable online beer knowledge and whether peanuts qualify as a snob-beer snack, check out the first episode of Tapping The Conversation on sacurrent.com.