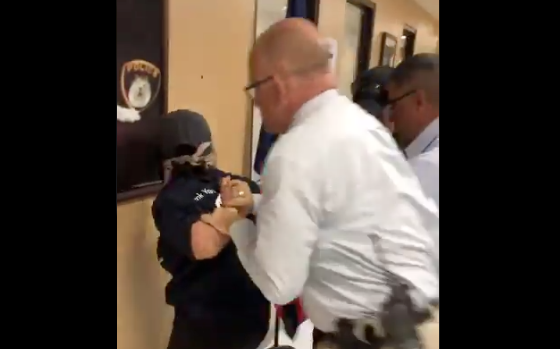 University officials told KSAT that campus security officers as well as the San Marcos Police Department arrested the students following an incident near the Quad. The student-run University Star newspaper reported that the Texas Nomads, a group not affiliated with the university, had planned to march on campus.

A Facebook page for the Texas Nomads states that the group believes "our veterans and warriors should come before refugees and illegal criminals."

The potential demonstration, as well as an expectation of counter-protests, caused university officials to order an increase in campus security. Reports indicate that the four arrested students were speaking out against the Texas Nomads.

UPD + local law enforcement are on the scene of an incident on the San Marcos Campus Quad - 4 students have been arrested. This incident involves only students, no identified outside groups involved. We will continue to monitor, at this time there is no immediate threat to campus

Crowd develops outside UPD station after witnesses report a girl was taken into UPD after she allegedly took a MAGA hat from a male student. pic.twitter.com/3NF0ZngXmD

Another student has been taken inside UPD after a scuffle occured and began yelling in the cops face. Police presence has increased since the scuffle. pic.twitter.com/Q71fTYfEYJ

Students at #TXST were just arrested on campus for speaking out against group demonstrations said to occur on campus today. @KTSWNews pic.twitter.com/3JADgjJaPH

According to one tweet, some students got into an altercation with a person identified as white supremacist.

Other posts suggested that the arrested students were singled out.


I was in the police station with the two students. doing as much as the second arrested. Nothing was done to me ¯\_(ツ)_/¯ give my avi a click n figure out why https://t.co/U3swjmwfYI

They're continuing to arrest people of color ONLY and letting the yts go entirely.

Here's the video, #txst. We both went in to accompany someone who was arrested. They told us we couldn't follow them and we didn't immediately leave the lobby. They said her crime was "resisting arrest," but wouldn't that require a preceding crime..? pic.twitter.com/dic4Qn324R

I didn’t touch an officer, i didn’t touch another student. I was arrested for exercising my First Amendment Right. Denise, do something about it or WE WILL. https://t.co/NtpjtM3Cko

According to a university official, the arrested students include Tyvonte Davis-Williams, Nazarene Freeman, Claudia Gasponi and Alejandra Navarrete. Davis-Williams faces a charge of disorderly conduct-language while Freeman is charged with interference with public duties and failure to identify. Gasponi was also charged with interference with public duties as well as resisting arrest. Navarrete was charged with providing false information and failure to identify.