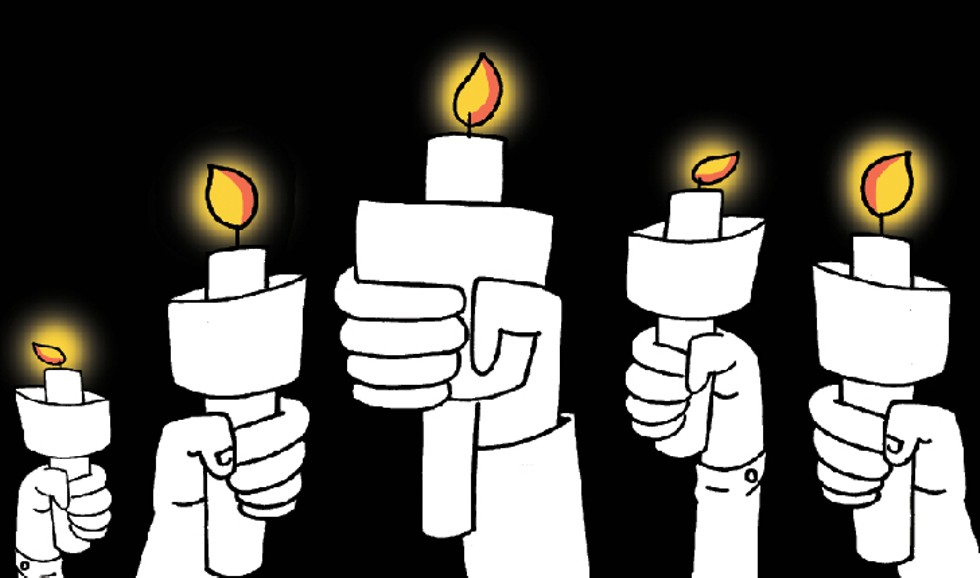 Artwork and cover design by Carlos Aguilar
At 11:20 the morning of Sunday, Nov. 5, a 26-year-old man dressed in all black wearing a bulletproof vest crossed Highway 87 into the grassy lawn of First Baptist Church of Sutherland Springs, and began shooting.

He continued shooting as he entered the church, peppering the small congregation inside with bullets. Law enforcement officials say that everyone inside First Baptist that morning was either wounded or killed by the bullets from Devin Patrick Kelley’s semi-automatic rifle. Kelley took the lives of at least 26 people — or, seven percent of the entire population of Sutherland Springs, a small Wilson County town about 40 miles east of San Antonio.
Twenty people were sent to the hospital, some with life-threatening injuries.

After exiting the church, Kelley was shot by neighbor Stephen Willeford, prompting him to drop his rifle and run to his car in an attempt to escape. But Johnnie Langendorff, a Seguin resident who witnessed this confrontation from his car, picked up Willeford and the two sped off after Kelley, who was headed north. The men eventually found Kelley’s car on the side of the road near the Guadalupe County line. Kelley was inside, dead from a self-inflicted gunshot wound.

The Sunday attack was the deadliest mass shooting in Texas history. It is the 307th mass shooting in the United States this year, coming just a month after a gunman in Las Vegas killed 58 people attending an outdoor concert.

“There are so many families that have lost family members. The tragedy is worsened that it happened in a church, a place of worship,” said Governor Greg Abbott at a Sunday evening press conference. “I ask that every mom and dad put your arm around your kid tonight and let them know how much you love them. Tell your friends and neighbors that you support them and will work with them.”

Information about the dead has slowly begun to emerge. The youngest victim in the church was 18-months-old, and the oldest was 72. At least 12 of the 26 dead were children. Eight people who died were from the same family, and spanned three generations. One victim was pregnant. One of the victims was the 14-year-old daughter of First Baptist’s head pastor Frank Pomeroy.

“That’s the thing that is going to keep us strong is knowing in our faith, they are with their lord and savior right now,” said Pomeroy, who was out of town the day of the shooting.

The concrete details of Kelley’s motives for shooting up a peaceful church remain fuzzy, but some clues have begun to come into focus.

According to federal records, Kelley served in the Air Force from 2010 and 2014, where he was stationed at Holloman Air Force Base in New Mexico. In 2012, however, Kelley was court-martialed and convicted for assaulting his first wife and young child. He was sentenced to a year in prison. The felony lost him his Air Force ranking — and stuck him with a “bad conduct” discharge from the military. Unlike a dishonorable discharge, veterans with a bad conduct charge can still legally own a gun. Kelley obtained a divorce in 2012, and remarried to his current wife, Danielle Shields, in 2014.

Perhaps because of the previous criminal charges, Kelley does not have a license to carry a gun in Texas. But somehow all three of the guns found in his possession on Sunday had been purchased by Kelley, both in Texas and Colorado.

Regardless, conservative politicians have stood by the now-common GOP response to mass gun violence: This isn’t about gun control.

“This isn’t a guns situation,” said President Donald Trump in a Monday press briefing. Instead, he called the shooting a “mental health problem at the highest level.” This comes months after Trump merrily repealed an Obama-era regulation that was meant to keep guns out of the hands of people with a mental illness.

“These are human acts of terror and violence. There is a human solution to them beyond offering prayers,” wrote El Paso Congressman Beto O’Rourke in a blog post.

“We know that guns designed to kill as many people as possible as quickly as possible — designed for use by militaries to kill enemy soldiers — will be used by some to kill people efficiently and effectively when they are sold to civilians.”
He joined dozens of other state and national lawmakers in urging Congress to start a real debate and discussion on the issue of gun violence.

The small community of Sutherland Springs has already held a number of church services and candlelight vigils to support the families. Most remain in shock.

“Our church was not comprised of members or parishioners — we were a very close family,” said Sherri Pomeroy, the wife of First Baptist pastor Frank. “We ate together, we laughed together, we cried together and we prayed together. Now most of our church family is gone. Please don’t forget Sutherland Springs.”