Texas' abortion ban is having a 'domino effect' on clinics across the U.S. 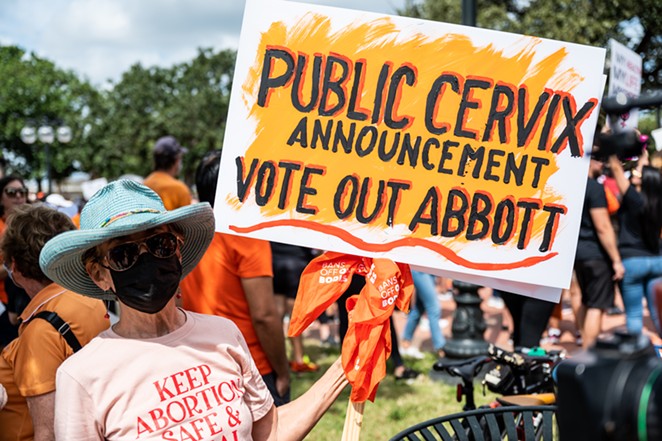 Jaime Monzon
A woman protests Texas' near-total abortion ban at a march in San Antonio last weekend.
This article was originally published by the Texas Observer, a nonprofit investigative news outlet. Sign up for their weekly newsletter, or follow them on Facebook and Twitter.

When Texas abortion ban Senate Bill 8 took effect on Sept. 1, phones at the four Whole Woman’s Health abortion clinics in the state wouldn’t stop ringing. Clinic staff in Austin, McAllen, Ft. Worth, and McKinney were inundated with calls from confused and scared patients seeking abortions hoping they could still access care in their communities.

Passed by the Republican-dominated Texas Legislature this Spring and signed into law by Gov. Greg Abbott in May, SB 8 forbids abortion care once embryonic cardiac activity is detected, which is typically around six weeks, and offers no exception for rape or incest. Since the overwhelming majority of pregnant people don’t realize they are pregnant this early or seek care before six weeks’ gestation, the law has amounted to a near-total ban on abortion in the second largest state in the country. The law also allows any private citizen to sue an abortion provider or someone who “aids or abets” the procedure and awards them a $10,000 bounty if they prevail in court. SB 8 is considered the most restrictive abortion law since before Roe v Wade, which has protected the right to abortion care since 1973.

In effect for more than two months thanks to the inaction of the Supreme Court, SB 8 has had devastating effects on women seeking reproductive health care in Texas—a state in which abortion care was already difficult to access due to a maze of state-imposed barriers.

Now, an “eerie quiet” has fallen over the Whole Woman’s Health clinics.

“We were flooded with calls when the law first took effect, but now people aren’t calling much, making appointments, or even coming in,” Amy Hagstrom Miller, president and CEO of Whole Woman’s Health, tells the Texas Observer. “We know patients are being forced to travel out of state for care — and many of the surrounding states have wait times up to six weeks. It’s awful and very frustrating, because we should be able to give them care in their own communities.”

It’s not just neighboring states in which patients have sought care. Hagstrom Miller has heard from colleagues who provide abortions as far away as New York, Washington, Michigan, Georgia, and Florida seeing patients who made the trek all the way from Texas.

Hagstrom Miller’s experience substantiates new research from reproductive health policy organization the Guttmacher Institute, which found at least 12 states that do not border the Lone Star State are serving patients from Texas. Based on data from 120 clinics in 28 states and Washington, D.C., Guttmacher found Texas patients are traveling hundreds and even thousands of miles from their homes to receive abortion procedures in places including Illinois, Washington, Ohio, California, Indiana, Tennessee, and Maryland. In some cases, the number of patients coming in from Texas has doubled: A clinic in Tennessee reported it had twice as many patients from Texas since the law took effect than it did in all of 2020.

“Many people in Texas cannot get care close to home,” said Elizabeth Nash, principal policy associate at the Guttmacher Institute, tells the Observer. “You are seeing people literally looking across the continental U.S. for access to abortion because there is a sheer disregard for that need in their own state.”

As Texans flee to nearby states for care, those clinics, in turn, have become overloaded with patients, forcing some to travel even farther. The Texas Policy Evaluation Project recently found that appointment wait times in neighboring states including Arkansas, Louisiana, New Mexico, and Oklahoma — which combined have 14 abortion facilities while Texas has 20 — were now much longer following SB 8. Wait times exceeding two weeks are “common” at many clinics. And those states severely lack the capacity to take on new patients: The total number of abortions typically provided in all of those states combined is only 41% of the number of abortions that were provided in Texas annually.

According to researchers, these trends have had a domino effect: With decreased availability of abortion appointments for the residents living in states neighboring Texas, some women have been forced to travel out of states like Oklahoma for care themselves — a sign that the Texas ban may be disrupting the entire reproductive health network in the U.S.

“Because Texas is so large — in both population and geography—we are seeing massive ripple effects across the country for other states taking on displaced patients,” Nash said. “They are having to absorb these new patients and the abortion clinic network is not really set up for that, especially as we’ve seen the number of clinics decline over the years. The Texas ban is leveling a new and unprecedented burden on other states.”

Shannon Brewer, director of Jackson Women’s Health Organization, is experiencing that domino effect. Her clinic — the sole abortion facility in Mississippi — saw a jump in Texas patients after SB 8 was enacted: Today, one-fourth of the largely low-income patients the clinic serves come from Texas.

“[The Texas ban] caused our facility to be very busy. Our phones were ringing off the hook,” Brewer said during a recent press call. “Patients from Texas were calling and panicking — they don’t know what to do. They’re calling clinics in surrounding states but they’re all booked up for three to four weeks because of the influx of Texas patients.”

Brewer expanded clinic hours from three days a week to six and now has five doctors flying in to offer abortion care on an alternating basis. Her clinic is under “tremendous stress” as it also at the center of an upcoming Supreme Court case challenging the state’s 15-week ban; the ruling could upend or severely chip away at Roe.

Abortion funds, which hear from patients on the ground every day as they assist with access to care, have seen sizable increases in out-of-state visits. Abortion fund group, Fund Texas Choice, said that nearly 100% of its clients are traveling out of state for abortion care while the Frontera Fund reports that the average number of miles a client is traveling round-trip for abortion since SB 8 has jumped to 849 miles, or 11-fold. Kamyon Conner, executive director of the Texas Equal Access fund, told the Observer 75% of its clients are forced to flee the state for care, as opposed to just 25% before SB 8 went into effect.

That often means higher costs associated with travel, lodging, child care, and time off work—and that’s for those who are able to secure the resources to do so. Abortion bans like SB 8, remind Conner, disproportionately impact low-income people and people of color, who already bear the greatest burdens in accessing health care. Nearly 75% of abortion-seeking patients in Texas are people of color and 44% have family incomes below 200% of the federal poverty guidelines.

“There is so much confusion and desperation from our callers—and those are the people we can help,” Conner said. “I worry about the people who are not going to be able to leave the state, who will be forced to carry unwanted pregnancies to term against their will. We are doing everything we can to help as many people as possible.”