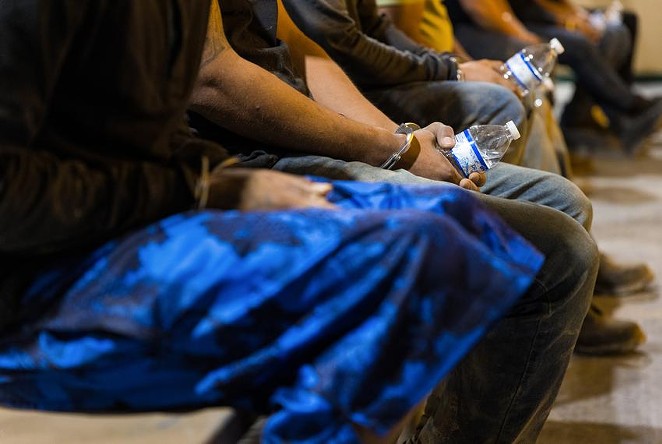 Though the ruling may be appealed and applies only to Jesús Guzmán Curipoma, a 36-year-old oil engineer, it opened the door to constitutional challenges from more of the thousands of migrants who have been imprisoned for allegedly trespassing since July, when the governor set his sights on mass trespassing arrests as a way to cut down on border crossings.

“Everybody who has a pending misdemeanor trespassing arrest under OLS will have the exact same challenge,” said Kristin Etter, an attorney with the Texas RioGrande Legal Aid who represents hundreds of migrants. “This sets a clear precedent in all of those cases both pending and future.”

Though far from the first court challenge to Abbott’s arrest initiative — which has been vexed with wrongful arrests, prosecutorial errors, court delays and ethics complaints — Soifer’s ruling is the first to rule against the constitutionality of a migrant’s trespassing arrest, according to Etter.

On Friday morning, Texas Attorney General Ken Paxton vowed to appeal the ruling, though it's not yet clear how he will do so since his office was not a party in the lawsuit. A spokesperson for Abbott said Friday morning that "there is no doubt that this will be overturned."

"The district court did not have legal authority to enter this flawed and collusive judgment without hearing from the Office of the Attorney General," Nan Tolson said in a statement.

As apprehensions of migrants skyrocketed last year at the Texas-Mexico border, Abbott became enraged with President Joe Biden’s immigration policies and sought to clamp down on illegal immigration himself by sending thousands of state police and military personnel to the border region. He moved to sidestep federal jurisdiction over immigration law by ordering his police to arrest people suspected of crossing the border illegally on state criminal charges, like human smuggling or trespassing.

“While the Biden Administration refuses to do their job and ignores the pleas of border communities for help, Governor Abbott continues working with state and local partners to surge critical personnel and resources needed to secure the border and protect Texans,” another Abbott spokesperson, Renae Eze, said in a December statement.

Since July, Etter said more than 2,000 men have been arrested for allegedly trespassing in Kinney County alone, which has about 3,000 residents. Nearly 900 are currently held in state prisons turned into immigration jails, and men often wait months before their first court hearing on a charge that could at most land them a year in jail.

Guzmán Curipoma’s lawyers argued that his arrest, like thousands of others, was unconstitutional because it was an attempt to overstep federal immigration law.

“The prosecutions of people suspected to be migrants of nonviolent criminal trespass charges under Operation Lone Star is unconstitutional under the supremacy clause,” attorney Angelica Cogliano argued before the court Thursday.

The supremacy clause makes clear that federal law and the constitution trump state statutes. During the hearing before Soifer, lawyers often referred to the U.S. Supreme Court ruling against Arizona’s controversial law in 2010 that made it a state crime to be unlawfully present in the U.S. The high court largely held that federal law prohibited the state law, in part because it usurped the federal government’s authority to use discretion in the deportation process.

“State laws that have attempted to supplement federal immigration law with parallel state criminal penalties for immigration offenses have, thus, been struck down by courts,” Cogliano and attorney Addy Miró wrote in Guzmán Curipoma’s filing.

It’s unclear how and if Soifer’s ruling will be appealed. Skirting the conservative judge and overloaded court in Kinney County, where the vast majority of trespassing arrests have occurred, Guzmán Curipoma’s attorneys raised the challenge in Austin. The lawyers argued in filings that such cases can be heard by any state district judge, not just the judge presiding over the defendant’s criminal case, and that lengthy delays in the small court should allow them to seek relief elsewhere.

The case then landed in front of a Democratic judge with the progressive district attorney’s office in Travis County representing the state, siding with Guzmán Curipoma.

A spokesperson for the Kinney County Attorney said he would not comment on pending litigation.

A private attorney acting on behalf of the Kinney County misdemeanor prosecutor routinely objected to the hearing to no avail. David Schulman argued that the Guzmán Curipoma’s challenge against his detention shouldn’t be heard because he had since been released from prison on bond. He also urged that the Kinney County attorney’s office, not Austin prosecutors, should have represented the state in the migrant’s hearing.

“This case has nothing to do whatsoever with Travis County,” Schulman said.

Schulman later argued that the Texas Attorney General’s Office should be involved in the case, but Soifer dismissed the notion.

Etter said the reason attorneys started seeking hearings outside of Kinney County is because it often takes more than a month to have any emergency issue heard in the small border town. She also credited the change to Kinney County Judge Tully Shahan, who axed state-assigned judges helping with his caseload after they released many migrants on no-cost bonds. New judges he has assigned often decline to reduce bail or grant other relief for migrants, leading to a fast rise in men pleading guilty to receive a sentence equal to the time they’ve already been in prison at their first court hearing.