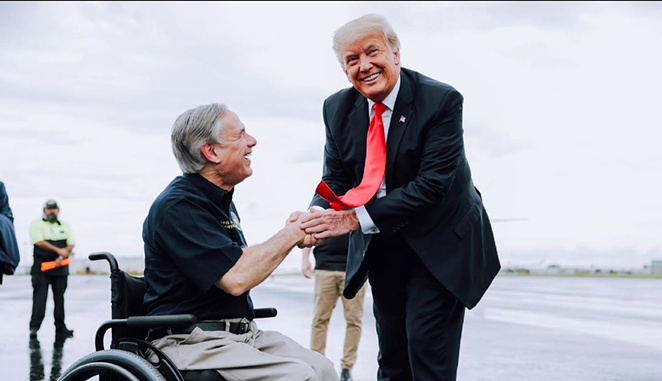 It's that time when Texas Monthly trots out its Bum Steer Awards, an annual recognition of the dumbest, douchiest and most dastardly characters dragging the Lone Star State into the gutter.

In what should come as little surprise, the mag named the illustrious Gov. Greg Abbott — who certainly checks all three boxes — as its Bum Steer of the Year.

In a brutal assessment of the Republican governor's record, Texas Monthly blames him for costing lives by fucking up the pandemic response, dragging the state into Far-Right Fringe Land and showing a complete lack of appetite for dealing with the cause of February's deadly winter storm — because the fossil fuel industry, it turns out, sure knows how to fund political campaigns.

One of Abbott's fundamental faults, the mag points out, is that he's spent his entire governorship pandering to the most extreme GOP voters rather than regular Texans who just want to earn a living, survive a pandemic and access health care.

"From the beginning, Abbott was attuned to the 4 percent of Texans who decide Republican primary elections and that group’s many peculiar priorities," Texas Monthly writes. "The slightest shift in the wind from the right would provoke a change in direction."

Word. It's hard to think of a bummer steer roaming the state right now.

Meanwhile, San Antonio was well-represented in the rest of Texas Monthly's roundup — even if none of our politicos were at the top. Among the Alamo City asshats who drew a razzing were:
Oh, yes, the awards also concurred with the Current's recent assessments that U.S. Sen. Ted Cruz only pretends to value the Constitution he sought to shred in his bid overturn the legitimate 2020 election, and that U.S. Sen. John Cornyn's brisket looks like dogshit.