Texas Republicans Are Calling News They Don't Like 'Fake' 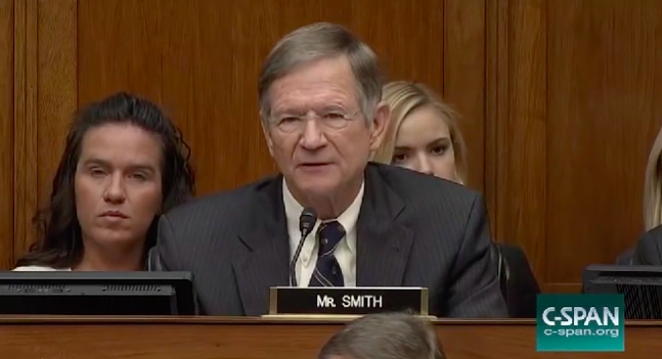 These are just a few Texas lawmakers who have hijacked a term used to define an actual threat to American democracy — so-called "fake news" — in order to delegitimize any reporting they simply do not like. And for Texas Republicans, that apparently covers a lot of things.

On Tuesday, Texas Congressman Lamar Smith took to the House floor to condemn a New York Times column that linked severe droughts in Madagascar to climate change. The article, penned by regular columnist Nicholas Kristof, pointed to the country's 1.3 million children suffering from malnutrition as clear evidence that global warming could have deadly repercussions.

“This may be a new high, or maybe a new low, for climate alarmists and their exaggerations," he said.

But let's be clear: This news is not "fake."

Madagascar is in the grips of a deadly drought, leaving millions of starving children in its wake. New, peer-reviewed research co-published by the federal government has calculated that human contributions to global warming have reduced water runoff in southern Africa by 48 percent. Yes, Kristof added his editorial slant, but the facts check out. Unfortunately, nothing about this sobering news is "exaggerated."

What we can only assume Rep. Smith is trying to articulate is that he doesn't agree with the article's conclusions. Which is fine. But smacking the label "fake news" on a reported, factual piece of journalism is only blurring the clear line that needs to be drawn between genuine reporting and overt propaganda.

"Fake news" was a term coined this election season to describe the entirely fabricated articles disguised as factual news that went viral across social media. Most people behind these articles didn't care about politics, they simply found the easiest way to make people click their Facebook link — which is apparently a profitable business model outside the United States

Many of these articles largely fed off of the far-right's fears, using headlines like "FBI Agent Suspected In Hillary Email Leaks Found Dead In Apparent Murder-Suicide," "Florida Democrats Vote to Impose Sharia Law on Women," and "Colorado Pot Shop Accepting Food Stamps" to drum up outrage — and action. That last story, originally written as satire, inspired Colorado to pass a law explicitly banning food stamps from being used in weed shops (a thing that had never actually happened).

In their election postmortems, media experts and political scientists have said these fake news stories played a significant role in helping Donald Trump win the election.

Other Texas officials have also deployed the term to define news they'd rather ignore. Like last week, when Lieutenant Gov. Patrick told a roomful of Texas reporters that their articles on his anti-transgender "privacy bill" were fake, simply because they exposed some of the bill's obvious downfalls. When news outlets did the same to state Sen. Konni Burton's bill (one that advocates say could force school staff to out LGBT kids to their parents), she called the reporting "totally false." Meanwhile, Agriculture Commissioner Sid Miller called local reporting on a rude note he left for a restaurant manager "fake," despite him admitting that the story was entirely true. Meanwhile, Miller has no problem sharing obviously false "news" stories on his own social media accounts.

It seems in following the lead of the man they elected to be president, Texas' top politicians have used the post-election "fake news" panic to discredit any reporting that's critical of their work.