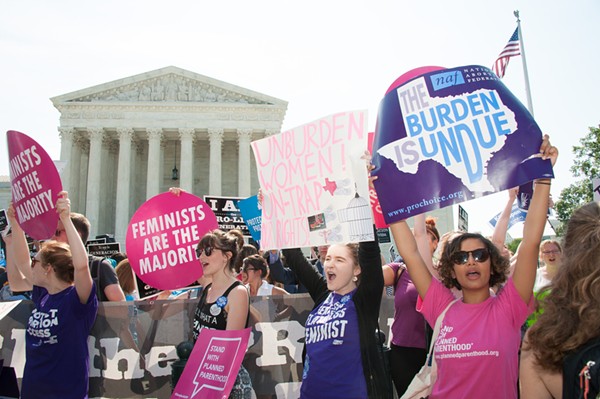 Rena Schild / Shutterstock.com
Top reproductive rights lawyers are suing Texas' health department for its newly minted "fetal burial" rule a week before the law is meant to go into effect.

The Center for Reproductive Rights filed litigation Monday morning against the Department of State Health Services, arguing that the rule disregards a woman's constitutional right to access abortion — a right upheld by the Supreme Court earlier this year.

“These insidious regulations are a new low in Texas' long history of denying women the respect that they deserve to make their own decision about their lives and their healthcare," Nancy Northup, the group's CEO, said in a press release Monday.

Texas' fetal burial rule, which got final approval last month, will require medical providers to cremate and bury the fetal remains of every miscarriage and abortion procedure at their clinic — regardless of how far along the pregnancy was. In many cases, this means burying a quarter-sized clot of embryonic tissue. Women are already allowed a burial for a miscarriage or abortion in Texas if they want one. This rule, however, would force every woman to participate, regardless of their spiritual or cultural beliefs.

There is no proven public health or safety reason behind this rule, leading critics to call it a purely political move meant to further encumber the state's already limited abortion providers.

The lawsuit argues that the rule "imposes a funeral ritual" on women directly after having a miscarriage or abortion — which is both inappropriate and insensitive. Plus, the suit claims, the rule forces providers to work with an "extremely limited number of third-party vendors" to bury and scatter ashes. In previous conversations with supporters of this rule, the Current found that only one Austin cemetery showed interest in burying the remains on its premises. CRR lawyers say the lack of vendors will push costs on abortion clinics, threatening their long-term ability to remain open.

CRR said the fetal burial rule is in direct defiance of the court's ruling, which prohibits states from imposing burdensome restrictions on abortion access without providing any legitimate, medical benefit.

"We...have a history of fighting restrictions that are deeply rooted in shaming and stigmatizing Texans and today’s filing is no different," said Amy Hagstrom-Miller, president of Whole Women's Health and lead plaintiff in the recent Supreme Court case, in a press release. "We will not stand for Texas putting more undue burdens on women and families."

Texas approved the rule after holding two packed hearings on the proposal and receiving hundreds of testimonials opposing the decision. Little of the public's input is reflected in the state's final draft — leaving providers and women with critical, unanswered questions.