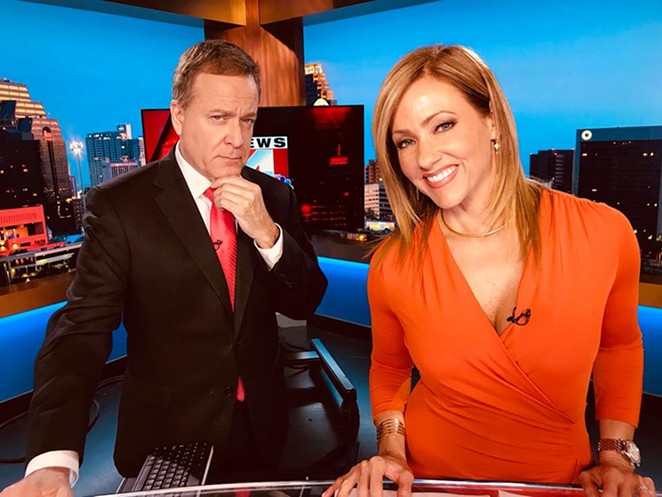 Delaine Mathieu/Facebook
When Deadspin last week spliced together footage of anchors at Sinclair Broadcast Group TV stations across the country reading an identical statement decrying “fake news,” the effect was creepy. It perfectly captured the point at which a media giant injected politics into local news.

But, in reality, there’s nothing new here.

Sinclair — owner of San Antonio’s WOAI-TV, KABB-TV and KMYS-TV — has spent the past two decades using the credibility of its local anchors to foist off a far-right political agenda. And those efforts are poised to reach even more eyeballs if federal regulators allow the Maryland-based company to complete a deal that will bring its signal into three-quarters of U.S. households.

“We’ve always known corporate owners have opinions, and that those opinions affect the content,” Delwiche said. “But, until this video, we’ve tended to see those filters operating in a more fuzzy and abstract way.”

Although in Sinclair’s case, “fuzzy” might be in the eye of the beholder.
The company’s controlling Smith family began putting their conservative stamp on stations as early as 2001. After the 9/11 terror attacks, they mandated local anchors read statements supporting George W. Bush’s war on terror. In 2004, they made headlines by trying to force outlets to run a 30-minute documentary slamming Democratic presidential candidate John Kerry’s war record. The company eventually trimmed the hatchet job down to five minutes, following threats of a massive ad boycott.

And, for the past year, the media group has required its 193 stations to run pro-Trump propaganda segments featuring former White House official Boris Epshteyn. In them, Epshteyn — now Sinclair’s chief political analyst — frequently takes aim at other media for their stories critical of Trump.

Attempts to contact Sinclair prior to press time were unsuccessful, but the company did issue a news release defending its “fake news” segment. In it, Scott Livingston, Sinclair’s senior vice president of news, said it was “ironic that we would be attacked for messages promoting our journalistic initiative for fair and objective reporting.”

But Livingston’s statement misses the point (perhaps intentionally), observers argue. It’s not the pledge to be fair and objective that’s alarming, but the way the promo mirrors Trump’s language. Not to mention, the statement fails to acknowledge the years of “must run” content Sinclair’s home office forces on its local stations.

Don Dimick, a former editor and videographer for WOAI and KABB, quit that job in October, in part because of Sinclair’s must-run dictates. Among the most flagrant, he said, was its requirement that stations run its shrill “Terror Alert Desk” segments, whether or not they contained anything newsworthy to local viewers.

While Dimick understands public outrage over the “fake news” promo, he urges people not to take that anger out on employees at local stations. Most want to do good local news and fear leaping off the train when journalism job prospects are the worst in modern history.

“I quit because I didn’t like working for Sinclair,” he said. “But I wouldn’t want to say anything bad about the local anchors, the local photographers, the local reporters. They ran this stuff because they had to. It was like taking medicine.”
Delaine Mathieu, an anchor at both WOAI and KABB, posted on Facebook that she and fellow anchor Randy Beamer had no choice but to read the recent promo if they wanted to keep their jobs. The pair had to re-record their initial cut because they looked “so mortified.”
“I absolutely understand — it was hard for us to watch, too,” she responded to a poster who threatened to tune out the newscast. “Beamer and I have nothing if we don’t have our credibility and trust in the community.”

It’s not like Sinclair’s controllers have exactly been quiet about their political goals. Since 1994, the company, its officers and owners have paid $1.4 million in campaign contributions, overwhelmingly to Republican candidates, according to the nonpartisan Center for Responsive Politics. For his part, CEO David Smith recently told New York Magazine via email that print media “serves no real purpose” and is “so left wing as to be meaningless dribble.” (We’re guessing Dave meant “drivel” there, but hey, why trust print?)

And the chief beneficiary of the Smith’s on-air propaganda has certainly taken note. After the Deadspin clip surfaced, Trump wasted no time letting his thumbs do the talking.

“Sinclair is far superior to CNN and even more Fake NBC, which is a total joke,” he tweeted in support.

It’s especially alarming that Sinclair and Trump seem to be in lockstep as the feds consider whether to allow its $3.9 billion takeover of Tribune Media. That deal would allow the company to grow by as many as 43 stations and reach 72 percent of U.S. households.

The acquisition still needs approval from anti-trust regulators and the Federal Communications Commission, now led by Ajit Pai, the Trump-approved corporate cozy who led the dismantling of net neutrality rules. The FCC’s top internal watchdog is investigating whether Pai and his aides improperly pushed for rule changes that allowed Sinclair’s transaction.

Trinity’s Delwiche said the “fake news” promo could be a catalyst for outraged media consumers to limit Sinclair’s growing power. He points to Parkland, Fla., shooting survivor and gun control activist David Hogg’s Twitter campaign to drive advertisers from Laura Ingraham’s show, which has led to departures of around a dozen sponsors.

“It will require the public to engage in a certain level of media-literacy activism,” Delwiche said. “They’ll need to keep bringing attention to these things every time they happen.”