The Big Spoon: Weather Woes Are a Thing for San Antonio Restaurants 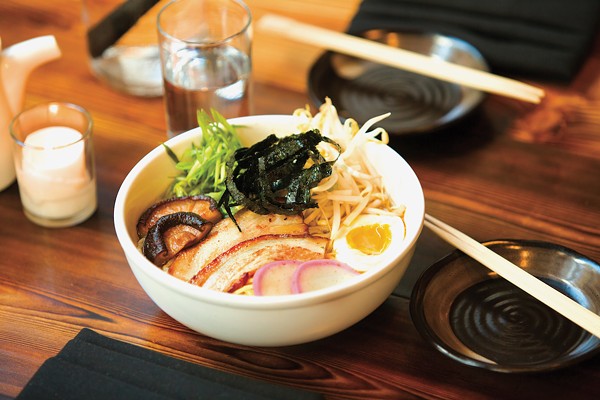 Courtesy of Kimura
Editor's Note: The following is The Big Spoon, an opinion column on San Antonio's food and drink scene.

From September 1 through sometime last week, it rained a total of 28 days in our suddenly Seattle-esque city. That’s a whole February’s worth of rain. It’s an entire zombie-movie timeline’s worth of dreary, gloomy, wet skies.

We don’t usually see this weather until November or December. Compound that with cold and flu season, and a mild case of Seasonal Affective Disorder (which had my boyfriend looking up light therapy lamps on Amazon), and I might not have been the most enthusiastic eater in recent memory.

Still, a girl’s gotta eat, right? Feed a cold, or something along those lines. But the minute my sinuses became clogged and heavy with gunk (thanks, mold from aforementioned rain), all I wanted was soup, fideo, caldo, ramen, pho – and literally nothing else would do. It’s not like I could taste much, anyway…

Take a place like Rosella at the Garden. With its sprawling patio, it’s very weather dependent.

“From a marketing standpoint, we haven’t stressed the point that you can still come in and shop,” owner Charles Gonzalez said. “There’s a definite correlation between wet rainy days or the other extreme, hot days.”

To be sure, this isn’t a San Antonio-specific problem. Eater Dallas shared restaurant owner woes on October 16, citing owners’ pleas for support.

We’re not that different from the Big D. Chef-driven restaurants here are struggling, too.

Take it from the guy that owns five of them.

“It’s a tough time for restaurants. I’m specifically speaking for ‘chef driven.’ Not your favorite chain restaurant, or Mexican joint. I can guarantee you,” said Jason Dady via text. “The chef-driven market is suffering, especially the ones that were banking on patio weather. Anyone says otherwise, they are lying.”

Fat Tummy Empanada, which opened a brick-and-mortar location on the city’s West Side this August, also put out a call on social media asking for support after a few weeks of slow business.

Restaurants can only accommodate and adapt up to a point. For instance, the Bottling Department Food Hall has board games and rainy day food. The Bread Box delivers. Piatti’s will make you a hot toddy. The Jerk Shack, which has no indoor seating, has added soup to the menu and complimentary coffee and tea while people wait for their orders. The Point Park & Eats will package beer to-go in cans, bottles and growlers, and most of the food trucks will take carryout orders. And most businesses are partnered with delivery services like Postmates, Uber Eats, Grub Hub or DoorDash, though those services eat away at their profit margins.

Yes, call in those to-go orders. Yes, you should tip the person packing your meals.

I could point to global warming and how we’re just going to have to deal with crazier storms and weather patterns and how much that’ll affect crops and farmers and restaurants. But I don’t want to end this on a particularly dreary (but realistic) note.

Enjoy the warm days we have left on patios – it’s currently 75 and breezy as I write this – but don’t forget to support your favorite local haunt when the weather becomes less than ideal. Buy the wellies. Put on the raincoat. Use your best judgment. It’s just a little rain.